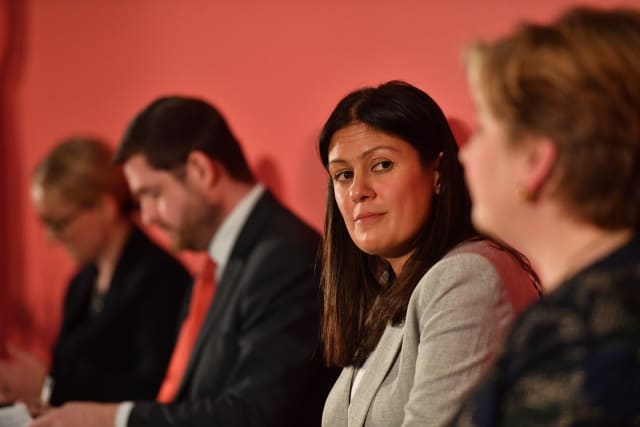 Lisa Nandy has accused her three leadership rivals of having remained “silent” while in the shadow cabinet during Labour’s anti-Semitism crisis.

The Wigan MP, the only backbencher left in the contest, used a leadership debate to put distance between her and the other candidates on the issue that has dogged Labour since Jeremy Corbyn became leader.

The Equality and Human Rights Commission (EHRC) is currently investigating complaints of anti-Semitism within the party, along with the actions it took to tackle the scourge.

Ms Nandy told the BBC’s Victoria Derbyshire programme it was “not good enough” for shadow cabinet members to talk about demanding reports into what was being done to tackle the problem, but then failing to act when nothing more was provided.

It comes after shadow foreign secretary Emily Thornberry, during a leadership debate on BBC Newsnight on Wednesday, said she and Sir Keir Starmer had requested that evidence be given to Labour’s top team.

Ms Nandy said: “We are not having an honest reckoning with how badly we have got this wrong and the collective role we have played in this.

“Leadership is about taking on issues when they are hard. Sitting in the shadow cabinet asking for reports, not seeing them, challenging and then remaining silent is not good enough.

“We have to be honest that far too many people in this party did not stand up and speak out when it counted.”

The former shadow climate change secretary noted that the only time she broke ranks while in the role was to speak out against a “high-profile incident of anti-Semitism”.

Ms Thornberry defended herself against Ms Nandy’s accusations, arguing it was the failure of Labour’s ruling body, the National Executive Committee (NEC), to crack down on racism.

She said: “We may be throwing people out of the party now for being anti-Semitic – and we are – but why didn’t we do it two and a half years ago?

“Why wasn’t the party dealing with it then? That’s the issue.

“And the shadow cabinet didn’t have any control over that, it was the National Executive Committee and the party.

“That’s why we were calling in the shadow cabinet, ‘Please come and report to us because you don’t seem to be able to deal with it’.”

During the televised debate on Thursday, three of the four leadership hopefuls said tackling anti-Semitism would be the number one priority if they replace Mr Corbyn on April 4.

Only Ms Thornberry did not list it as number one on her to-do-list.

Shadow business secretary Ms Long-Bailey, described by critics as the “continuity candidate” to Mr Corbyn, admitted the party did not “deal with the problem swiftly enough or robustly enough”.

She said: “What we have to do now is move on. We have to rebuild trust with our Jewish members and our Jewish community.

“We have to have a system that adopts any recommendations that are made by the EHRC, we have to have an independent legal process free from any perceived political bias.”

Shadow Brexit secretary Sir Keir, outlining why anti-Semitism was his top priority, said: “Until we can demonstrate that anyone anti-Semitic is out of our party, we will not be able to persuade people we can win an election.”

Out of the four, Ms Thornberry is the only candidate who has not progressed to the final round.

As of Thursday, she was six short of the 33 constituency Labour Party (CLP) nominations required to progress, with the deadline looming on Friday February 14.