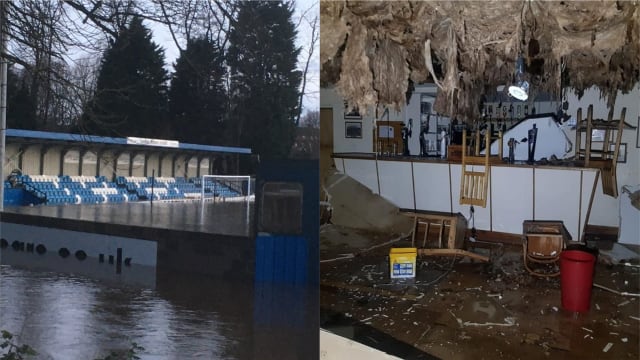 Local sports clubs have turned to the public for help after Storm Ciara left some fearing for their future.

The weather wreaked havoc across the UK earlier in the week, bringing widespread flooding and forcing some clubs to set up crowdfunding pages to cover their costs.

Their pitch and facilities suffered from severe flooding which chairman Andy Charlesworth believes could cost upwards of £15,000 to fix.

“We’re a club that’s run by volunteers,” he told the PA news agency.

“Things like this hit you for six, we don’t have any cash reserves and it’s really frustrating to be honest.

“There’s loads of money in the Premier League, but as it gets down to the lower levels there’s less and less.

“We don’t know whether we’ll recover from this.”

According to Mr Charlesworth, the pitch should return to normal if the water does not stand for long but damage to infrastructure is of greater concern.

Damage sustained by other clubs across the country ranges from waterlogged pitches to broken rugby posts, but clubhouse issues are often the most devastating.

Corby Town Rugby Club is one of those whose clubhouse, the centre of their community, has been destroyed by the weather.

The club, which is run on a voluntary basis, is seeking to raise £30,000 through their JustGiving page, a large chunk of which will go towards repairing the clubhouse roof.

“Ultimately that clubhouse is the lifeblood of the club,” Martin Drummond, player and club treasurer, told PA. “It’s how we generate our income to be able to pay the bills.”

The club has received help from locals including donated materials for repairs, while they have applied for relief from Sport England’s emergency flood relief fund, which offers up to £5,000 for emergency repairs.

“With £30,000 to raise in total, it is a significant contribution, but there’s still quite a lot of funding that we need to secure,” said Mr Drummond.

And while he was initially worried about the future of the club, Mr Drummond said that the public’s response has encouraged him.

“At the minute we’re just working on the good will of people contributing what they can,” he said.

“I’m truly hopeful, and I genuinely believe that we’ll come through this in much better condition than where we were, but it’s going to be a long haul.”

The UK’s week of miserable weather looks set to continue however as it prepares to be struck by a country-wide storm for the second weekend in a row.

A host of yellow weather warnings have been issued by the Met Office from Thursday until Monday, which include the arrival of Storm Dennis this weekend.