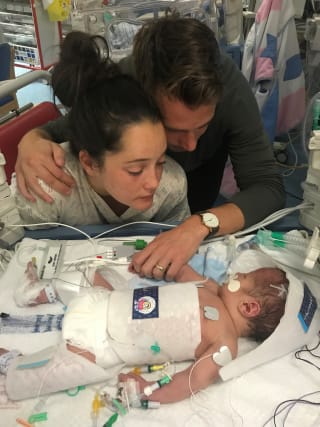 An independent review into maternity services at an NHS trust where a number of babies have died has been announced by the Government.

“Immediate actions” have also been promised and an independent clinical team has been placed “at the heart” of East Kent Hospitals University NHS Foundation Trust to ensure all possible measures are being taken.

It comes amid reports that at least seven preventable baby deaths may have occurred at the trust since 2016, including that of Harry Richford.

Harry died seven days after his emergency delivery in a “wholly avoidable” tragedy, contributed to by neglect, in November 2017, an inquest found.

Speaking in the House of Commons, health minister Nadine Dorries confirmed that an independent review of the trust’s maternity services was to be carried out.

She said: “NHS England and NHS Improvement are commissioning themselves an independent review into East Kent maternity services.”

The pledge for a review came in addition to the ministerial statement in which Ms Dorries pledged immediate action.

In the statement, she said: “From the findings provided to me, it is clear that the challenges at East Kent point to a range of issues including having the right staff with the right skills in the right place, effective multi-disciplinary working, clear collaborative working between midwives and doctors, good communication and effective leadership support.

“But it would be wrong to speculate that there is one single cause.”

It follows investigations into the trust by the Healthcare Safety Investigation Branch (HSIB) and Care Quality Commission (CQC).

Ms Dorries said that NHS England and NHS Improvement were already working closely with the trust and had taken “immediate actions”.

These included the Regional Chief Nurse providing support to address identified safety concerns and reviewing the effectiveness of leadership.

This would also involve ensuring the trust was learning from all historical cases and disseminating that learning throughout the organisation.

Ms Dorries said an expert clinical team had been sent to the trust, featuring a director of midwifery services from a CQC-rated Outstanding trust, two consultant obstetricians and consultant paediatrician and neonatologist.

She said this placed “the very best at the heart of the trust”.

She added: “We never will be complacent, and I can confirm to the House that I have had assurance from the Care Quality Commission that they are content that the trust is taking the issues identified seriously and has a genuine desire to make the necessary improvements.”

Also on Thursday morning, East Kent Hospitals University NHS Foundation Trust “wholeheartedly” apologised to “every one of those families we have let down”.

In a statement, a spokesman for the trust said: “We know that we have not always provided the standard of care for every woman and baby that they expected and deserved, and wholeheartedly apologise to every one of those families we have let down.

“We are taking all necessary steps to provide safe care and we are treating the recently raised concerns about the safety of our service with the utmost seriousness and urgency.”

The trust recognised that required change in its maternity service had not taken place quickly enough, and said it was doing everything it could to improve its culture.