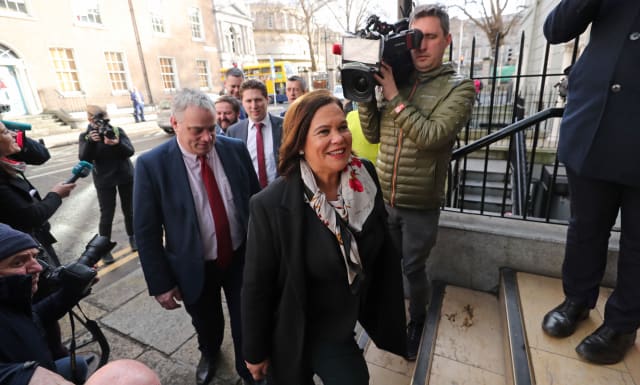 Ireland’s largest party Fianna Fail has agreed not to go into coalition with Sinn Fein following a four-hour meeting of its parliamentary party on Thursday.

The decision is likely to stop Sinn Fein entering power for the first time, as their leader Mary Lou McDonald said forming a coalition without them or Fine Gael would be “very, very tricky”.

Fianna Fail leader Micheal Martin has yet to respond to the Sinn Fein leader’s invitation to discuss the possibility of forming a coalition.

Speaking after the Fianna Fail parliamentary party meeting, TD Marc MacSharry said there was “overwhelming support” for the party’s position on Sinn Fein.

“There was overwhelming support for the position that the compatibility with Sinn Fein policy is not possible for us to work with,” he said.

“We totally respect the mandate and the people who voted for them but from a policy point of view it is just not possible to be in government with them.”

Mr MacSharry added there was unanimous support among party members for Micheal Martin to remain as party leader.

Ms McDonald said the time for other parties to say they would not speak to them about forming a government was over, following the party’s election success.

Fine Gael and Fianna Fail have repeatedly ruled out going into government with Sinn Fein, as talks begin this week to try to form a coalition government.

Speaking in Dublin following a meeting of the new Sinn Fein parliamentary party, Ms McDonald said: “We are stepping our way through a process where we work out what this government for change might look like.

“My first preference is for a government without Fianna Fail or Fine Gael. The seats are now filled and it looks like it would be tricky to form such a government.

“I have written to Micheal Martin and have not had any response to that correspondence, but I hope to meet with him.

“There are huge differences between ourselves and Fianna Fail.

“The question that arises in the midst of all of this is whether or not Fianna Fail can actually be a part of and commit to that appetite for change and good delivery for citizens on the ground.

“Micheal Martin has adopted a position that I believe is so far untenable, to say that he would not speak to us.

“We represent such a significant section of Irish opinion and I think anybody who followed and participated in the election cannot have missed the appetite for change, it was writ large – everybody agreed that that was fundamentally the theme of the election.”

Speaking on Thursday morning, Ms McDonald said: “We are not like those in politics for power or status. We’re not like those that have spent decades in government serving their own interests.

“That is old politics, that is politics of the past – where government came and went but the age-old problems remain.

“That is why Fianna Fail and Fine Gael were so determined to keep us out of government. They said they wouldn’t talk to us. Some of them still say it.

“That they will ignore the democratic mandate, but that stance has run out of road. Those days are over, now is the moment for change, now is our time.”

She said a referendum on Irish unity was a key part of the Good Friday Agreement and preparations must begin.

“It is a duty of the Irish government to commence this process. Unionists should not fear a debate and discussions about the future,” she said.

Taoiseach Leo Varadkar said on Wednesday that he expected to be the leader of the opposition in the next Irish parliament, meaning Fianna Fail and Sinn Fein were the most likely coalition partners.

Mr Varadkar said “anything is possible” in the coming weeks, including a second election, but added it would “not be good for the country”.

He said in a statement: “Sinn Fein is looking to establish a government for change. Now we wish to meet with Fianna Fail, and later on with Fine Gael. The first step of that process is for our leader Mary Lou McDonald to meet with the leader of Fianna Fail, Micheal Martin.”