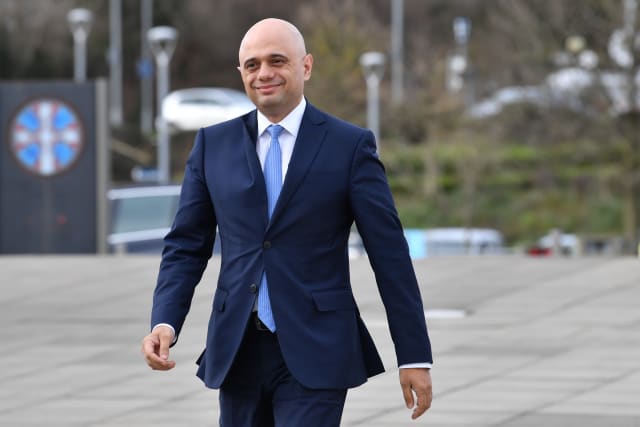 The London market has tumbled into the red on renewed coronavirus fears and after the shock resignation of Sajid Javid as chancellor sent the pound higher.

The pound jumped as investors bet the promotion of Rishi Sunak to replace Mr Javid in the second most important job in government would herald the start of increased spending.

As sterling rose, it compounded hefty share losses on the already under-pressure FTSE 100 Index, which joined global markets in the red after news of a sharp increase in cases of coronavirus and deaths in China.

The FTSE 100 closed down 1.1% or 82.34 points at 7452.03, having at one stage plummeted 127 points, with heavy falls from the likes of British Gas owner Centrica and Barclays compounding the declines.

With many blue chip stocks generating their revenues outside Britain, sterling’s gains put their shares further under pressure, with the pound up 0.7% to 1.30 US dollars and 0.9% higher at 1.20 euros.

There were also falls across Europe and on Wall Street amid worries over the spread of the strain of coronavirus – also known as Covid-19 – which brought an abrupt halt to investor hopes that the outbreak was easing.

In the US, the Dow was nearly 80 points lower at the time of close in London.

Among UK stocks, Centrica was the biggest faller as annual results revealed major losses after it was hit by the Government cap on energy bills and falling prices for natural gas.

It comes after the Government’s cap on energy prices came into force at the beginning of last year, promising to bring down bills for customers on default tariffs, but knocking energy firm profits.

Mr Staley said he “deeply regrets” the professional relationship with Mr Epstein, but admitted he remained in contact with Epstein for seven years after the American financier had been convicted.

It overshadowed a better-than-expected 25% hike in 2019 profits, though the bank cautioned 2020 targets would be “challenging”.

With oil prices in decline on worries over growth in China and the wider economy, BP and Royal Dutch Shell were also striding lower, falling 14.65p to 459.95p and 73.8p to 1947.2p respectively.

Elsewhere, Domino’s Pizza Group in the UK fell 4.1p to 311.1p despite a deal to offload its loss-making Norwegian arm, paving the way for further sales as it pulls out of under-pressure international markets.

Domino’s is paying up to £7 million in cash to existing minority shareholders to sell its entire 71% stake in the Norway division, but said it marks a “clean exit”.