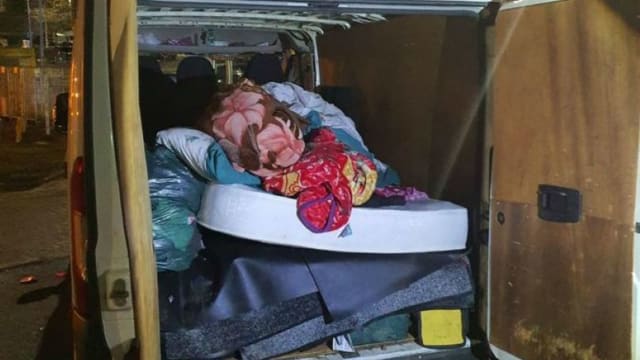 Babies and toddlers were among 11 people found in the back of an uninsured van stopped by police at motorway services.

Officers were in disbelief after opening up the vehicle at Stafford Services on Tuesday evening.

A total of 14 people were inside the vehicle, including the male driver and two other front-seat passengers.

Officers then discovered two babies and four toddlers were among those in the rear compartment.

The van first attracted police attention because of the general condition of the vehicle.

Checks revealed it had no tax or MOT, the Central Motorway Police Group (CMPG) said.

Officers said in a tweet: “We have stopped this van, on the M6 in @StaffsPolice area.

“It was showing as untaxed and no MOT.

“When we opened it we couldn’t believe our eyes.

“Fourteen people inside it, including babies and children.

“The consequences could have been horrific…driver can expect a day in court.”

The van was stopped at services on the northbound M6, in Staffordshire.

In a photograph released by police showing inside the rear compartment, a mattress could be seen with bedding piled up on top.

A Staffordshire Police spokeswoman said there were no arrests but the vehicle was seized for no insurance.

She added: “The driver was reported for a number of offences including no insurance, using a vehicle in dangerous condition, no test certificate and no vehicle excise licence.

“Arrangements were made for family members to collect those in the back of the vehicle and appropriate referrals are in hand.”