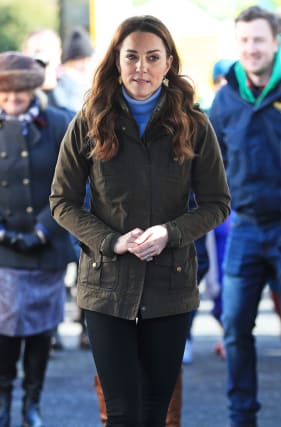 Sinn Fein’s leader in Northern Ireland was “not available” to meet the Duchess of Cambridge on her visit to the region.

Kate flew into Northern Ireland on Wednesday for a brief trip, during which she visited the Ark Open Farm in Co Down.

She was greeted on arrival at Belfast City Airport by First Minister Arlene Foster, before being whisked to the Newtownards attraction to promote her early years national survey.

Ms Foster said she had been delighted to welcome the duchess to Belfast.

She tweeted: “The Duchess will enjoy a wonderful Northern Ireland welcome at the Ark Open Farm in Newtownards. Lots of excited children… and adults.”

Deputy First Minister Michelle O’Neill had also been invited to greet the duchess, but Sinn Fein told the PA news agency she had not been available.

The party said in a statement: “Michelle O’Neill was not available, but agreed with the First Minister that she would meet and greet the British royal while visiting.”

Formerly, Sinn Fein members did not attend events with members of the royal family.

This included refusing to take part when the Queen made an historic visit to the Republic of Ireland in 2011.

However there was a landmark change in 2012 when the former deputy first minister Martin McGuinness met and shook hands with the Queen.

The late Mr McGuinness also attended a state banquet at Windsor Castle in 2014, where he took part in a toast to the Queen.