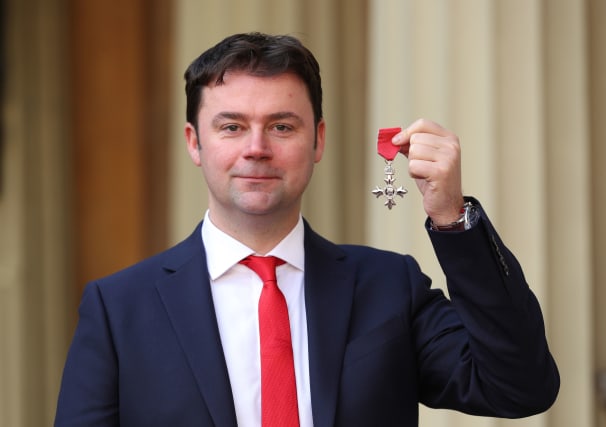 The solution to rough sleeping is simply providing enough affordable housing, a director at one of the UK’s largest homelessness charities has said.

Speaking after collecting an MBE at Buckingham Palace, Crisis’s director of policy and external affairs Matthew Downie said the system of night shelters and hostels can lock people into homelessness.

Mr Downie, who was honoured for services to tackling homelessness, said the biggest factor driving people on to the streets was the inability to pay their rent.

According to data published in January last year, rough sleeping has jumped 165% since 2010.

There are an estimated 8,000 people sleeping rough in London alone each night.

“We used to talk about relationship breakdown and personal factors being a driver of homelessness but it really isn’t that any more, it is just that people can’t afford their rent,” Mr Downie said.

He added: “What is driving it is essentially a lack of affordable housing.

“But also when people need access to housing benefit to help pay their rent there is just not enough money because it was frozen.”

He said the current approach of placing people in hostels and night shelters is entrenching rather than solving the problem.

“The number one thing is to change the way we respond to the issue.

“Instead of putting people into hostels and night shelters – where typically people might stay for months, even years, accumulating support need and problems – instead of that, go directly to living somewhere that is your own home.

“What we find is that when you do that, people’s journey out of homelessness is quicker and it is cheaper.”

Mr Downie also warned against blaming mental health problems and addiction for rough sleeping, saying these issues often arose once someone is already on the streets.

“Having mental health issues is not something that leads to homelessness, but you do find that people who are rough sleeping disproportionately do have mental health problems,” he said.

“With the dangers and the extreme anxieties involved in homelessness, it is no surprise.”

“It’s no surprise people have these issues, so you can’t simply provide people with housing, you need intensive support,” Mr Downie said.

“But the trick is don’t wait – don’t ask people to qualify for housing, get them in as soon as possible and then provide the support they need.”

Despite the huge jump in homelessness in the last 10 years, Mr Downie said he was hopeful the Government is now taking the issue seriously.

“There is a lot of pressure politically now not just to solve rough sleeping but other forms of homelessness too – the Government in Westminster has committed to ending rough sleeping by 2024,” he said.

“And in Wales and Scotland they are already doing much better and the numbers particularly in Scotland are already going down.”

Some charities warn against giving to people who are begging but Mr Downie said this is not necessarily the wrong thing to do.

He said talking to people, giving food or other help can be enormously beneficial to those in need.

“The people we work with say that human contact can restore their dignity, their sense of being an equal human being and it’s really, really precious,” he said.

He also recommended members of the public contact StreetLink if they are concerned for someone’s welfare.