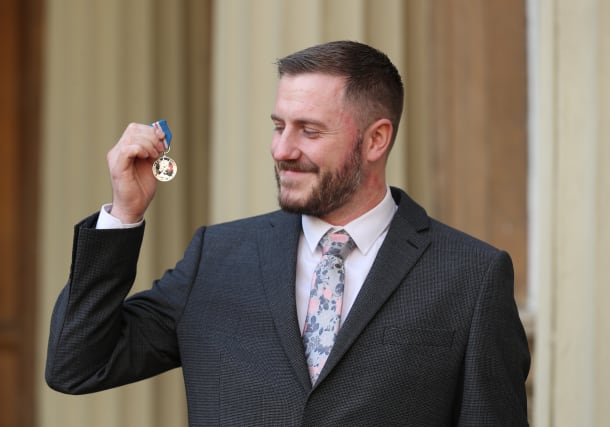 A hero tree surgeon who pulled a woman from the wreckage of a burning car was among those to receive honours at Buckingham Palace today.

Luke Ridley, from Amesbury in Wiltshire, was awarded the Queen’s Gallantry Medal for rescuing the woman after her vehicle flipped onto its side following an accident on the A303 close to his hometown.

The 30-year-old managed to cut the driver free from her seatbelt by climbing in through the boot of the Nissan Micra as the police tried to give him instructions over the phone in November 2018.

Mr Ridley used his pick axe and handsaw, which are part of his working tool kit, to free the woman.

Speaking after receiving his award from the Prince of Wales on Wednesday morning, he said: “I managed to get in through the boot, sliced the seatbelt and really luckily she was able to stand up on her own and I just grabbed her and dragged her out.”

Mr Ridley said he had taken the woman to his van and immediately driven off for fear the burning car might explode.

“It was on fire as I was pulling her out and when the police turned up they were obviously really shocked at the state of the car – it was a huge blaze,” he said.

Describing his day at the palace, he said “it’s still completely surreal”, and he joked that the fire service had tried to recruit him as a volunteer firefighter, but said he is going to stick with his day job.

Sir Clive, who is now chair of the board of trustees of international eyecare charity Sightsavers, said his greatest concerns for the future of humanitarian work is global political unrest and the threat of climate change.

But he said he saw hope in the growing movement of young people trying to bring about change.

“I think there are two great challenges facing us – one is climate change because of the frequency of disasters which is ever going up, and the other is the degree of uncertainty and unrest all across the world.

But he added: “I think younger people are determined to make the necessary changes – Greta Thunberg and her like might well provide the salvation we need.

“In my experience we live in a very generous and thoughtful country. So hopefully we can rise to the challenge.”

She praised the younger generations of the royal family for their work raising awareness of mental health.

Ms MacAttram, who was awarded an OBE, told the PA news agency: “It is extremely encouraging to see people in positions of power who need not acknowledge something like this because it changes the whole debate – it changes the landscape completely.

After 14 years at the helm of her charity, Ms MacAttram is stepping back and is considering developing lines of accessories drawing inspiration from the traditional kente fabrics of Ghana.

She had accessorised her white polka dot dress with her own handmade kente fascinator, handbag and shoes.

Also among those to receive awards were Theresa May’s controversial former chief of staff, Nick Timothy, who was one of the architects of her disastrous 2017 election campaign.

He was the brains behind the former prime minister’s social care policy which was swiftly dubbed the “dementia tax”.

Mr Timothy, who declined to speak to the press, was awarded a CBE alongside Fiona Hill with whom he shared the chief of staff role.

After collecting her award in January, Ms Hill described her time in Downing Street as “bloody hard”.