Lack of frost boosts the blooms at National Trust properties 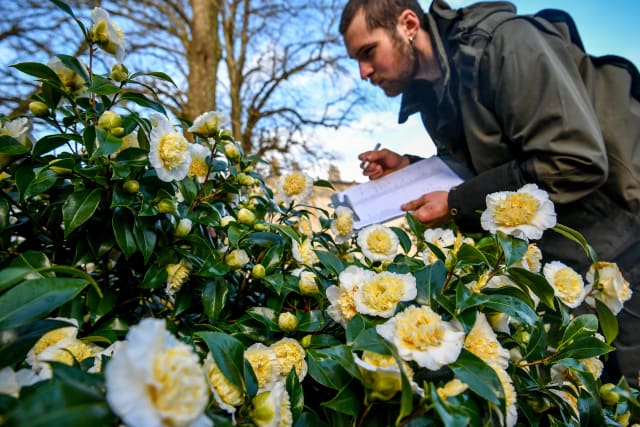 National Trust gardeners are counting flowers ahead of Valentine’s Day, with the warm start to the year giving them plenty to record.

As the trust celebrates its 125th anniversary staff have, for the 15th year running, been number crunching the vegetation making an early seasonal show at its properties in the South West.

Despite Storm Ciara, a lack of frost and snow means that the gardens are blooming.

At Lanhydrock, near Bodmin in Cornwall, there are more than 155 species in flower, including 84 different varieties of camellia.

Among the garden team are three members who have a combined service of over 125 years between them.

Head gardener Tommy Teagle has worked at the property for 42 years, as has assistant head gardener George Allen, while nursery manager Kenny Harris has 41 years’ service.

Mr Teagle said: “The flower count really marks the start of our season of blooms at Lanhydrock.

“Lanhydrock is such a big part of all our lives – we are passionate about the garden and the plant nursery and in the trust’s 125th year are delighted to be part of that celebration.”

For the fifth year running Saltram, near Plymouth in Devon, had the highest number of flowers recorded, with 204 plants in bloom.

Ian Wright, a garden adviser for the National Trust, said: “The most prolific in bloom in terms of different types was camellia, with over 450 camellia varieties in the South West, and limited visits from Jack Frost have meant fewer than usual flowers have been spoilt.

“Usually you would see some browning on the blooms due to frost or cold wind damage but this year most camellias are really displaying well throughout our gardens with many perfect blooms providing a real treat for the eyes and the cameras.

“Camellias were introduced from the Far East. Camellias have become firm favourites here in the South West, and they remain popular for very good reason.

“You can get an abundance of flowers from November through to May or even June, and even after flowers fade you still have the glossy, dark green leaves creating a perfect backdrop for other plants.”