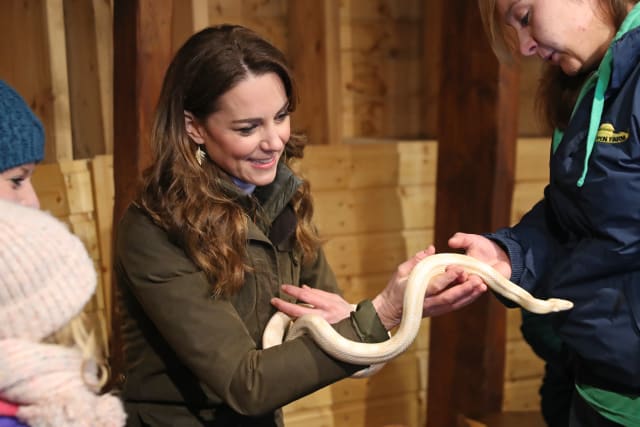 The Duchess of Cambridge turned snake charmer as she handled a corn snake on a surprise day trip to Northern Ireland.

Kate was left amazed as she held the pale yellow reptile named Sophie at Ark Open Farm in Newtownards, confessing it was the first time she had picked one up.

Holding out her arms, the duchess remarked: "Are you sure it's OK? Oh my goodness. No way," before adding: "Is there a way to hold her? Wow, look at that."

She asked a youngster next to her: "Do you want to touch the snake?"

Kate added: "She's got the most amazing skin. This is the first time I've ever held a snake like that. How cool is that?"

During her one-stop solo visit to Northern Ireland on Wednesday, Kate was given a guided tour of the farm in Co Down, meeting the owners and staff at the family-run attraction.

It comes as the mother of three has turned the spotlight on early childhood development, which is aimed at improving life chances by supporting expectant parents, parents and carers of children up to five years old, young children and their families.

The poll, conducted by Ipsos Mori on behalf of the Royal Foundation, is thought to be the biggest survey of its kind and asks "five big questions on the under-fives".

The duchess had made the issue of the "future health and happiness" of children a pillar of her public activities and hopes the results of the survey will spark a conversation on early childhood and guide the focus of her work.

During her visit on Wednesday, she met with local representatives of the Early Years organisation and families who have benefited from the work of the charity.