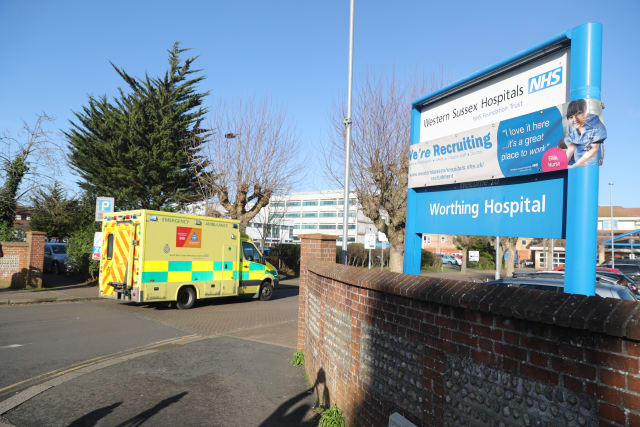 Efforts are continuing to trace a limited number of patients who came into contact with two GPs diagnosed with coronavirus in the UK.

One of the doctors had been working as a locum at Worthing Hospital and is among the eight confirmed cases of coronavirus to date.

Public health officials know that the pair worked at a nursing home, Worthing A&E and two GP practices between them.

Their direct contact with patients is thought to be limited to about 12 people, although they have come into contact with non-patients and other NHS staff.

Staff at Worthing Hospital received a memo on Tuesday telling them that a member of staff working in the A&E department had been diagnosed with the virus.

It said: “They treated a small number of patients on 4th and 5th February before they became unwell, followed advice and self-isolated.”

A spokeswoman for the Department of Health said all services at the hospital, including surgery and outpatients, are operating normally.

A source told the PA news agency on Tuesday that one of the GPs, who was a locum at County Oak Medical Centre, had only carried out one day of admin work there recently and had not had any direct contact with patients.

On Wednesday morning, the surgery, which was closed for a deep clean, reopened with a “limited service”.

A statement on the website for County Oak Medical Centre – operator of previously closed Warmdene and Carden surgeries – told patients that the facilities have been “extensively and rigorously cleaned throughout”.

Meanwhile, Patcham Nursing Home in Brighton said it was still “closed to all visitors” after one of the infected GPs visited a patient there about a week ago.

A spokeswoman for the care home said no-one was unwell and the closure was a precaution.

Also in Brighton, pupils at several schools have been told they could stay at home after reports that some teachers and families feared they had come into contact with the virus.

Meanwhile, two prisoners at HMP Bullingdon in Oxfordshire are being tested for the illness and are being held in isolation.

Access to one of the wings of the Category B prison has been restricted, and one of the men is understood to have been recently transferred from a jail in Thailand.

They are both reported to be suffering flu-like symptoms.

As of Tuesday evening, a total of 1,358 people have been tested for coronavirus in the UK, of whom 1,350 were confirmed negative and eight positive, the Department of Health said.

The World Health Organisation (WHO) has said the new strain of coronavirus is to be called Covid-19.

On Tuesday, the Prime Minister praised the response of the NHS and said anyone concerned should “simply follow their advice”.

Speaking in Birmingham, Boris Johnson said: “We are a great country, we have got a fantastic NHS, we have got fantastic doctors and advice, and they should simply take the advice of the NHS.

“People have every reason to be confident and calm about all that kind of thing … all the coronavirus, and any threats from disease.”

It came as Steve Walsh, the businessman at the centre of the UK outbreak of Covid-19, thanked the NHS for his treatment and said he is “fully recovered”.

The 53-year-old, from Hove in East Sussex, who is still in quarantine at St Thomas’ Hospital in London, picked up coronavirus while at a conference in Singapore.

On his way back to the UK, he stopped off for several days at a French ski chalet, where five Britons were subsequently infected.

Mr Walsh is also linked to five further cases of coronavirus in the UK, including the doctor working at the Brighton surgery.

Mr Walsh is also linked to one male patient who was taken ill in Majorca.

Speaking from hospital on Tuesday, Mr Walsh, a cub scout leader, said in a statement: “I would like to thank the NHS for their help and care – whilst I have fully recovered, my thoughts are with others who have contracted coronavirus.

“As soon as I knew I had been exposed to a confirmed case of coronavirus, I contacted my GP, NHS 111 and Public Health England.

“I was advised to attend an isolated room at hospital, despite showing no symptoms, and subsequently self-isolated at home as instructed.

“When the diagnosis was confirmed, I was sent to an isolation unit in hospital, where I remain, and, as a precaution, my family was also asked to isolate themselves.”

A spokeswoman for the Scout Association said Mr Walsh had not been to any Scout meetings since his return to the UK, and wished him a quick recovery.

Earlier, Dr Tedros Ghebreyesus, director-general of the World Health Organisation, described the outbreak as “a very grave threat for the rest of the world”.