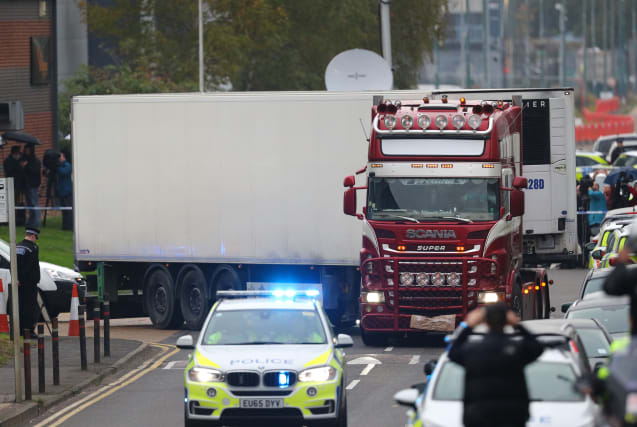 A lorry driver wanted in connection with the discovery of 39 bodies in a refrigerated container in Essex has been granted permission to appeal against his extradition to the UK.

A High Court judge in Dublin ruled concerns raised by Eamonn Harrison in relation to the European Arrest Warrant issued by UK authorities justify examination by a higher court.

Mr Justice Donald Binchy said it is in the public interest to explore the issues, noting that they transcend the facts of Harrison’s case and could have ramifications for other extradition proceedings.

Harrison, from Mayobridge, Co Down, is wanted for his alleged role in transporting the trailer in which the bodies of eight women and 31 men, all Vietnamese nationals, were found on an industrial park in Grays in the early hours of October 23 last year.

The 23-year-old, who was arrested at Dublin Port days after the discovery in England, is alleged to have driven the container to the port of Zeebrugge in Belgium and later signed the shipping notice for it.

The Crown Prosecution Service is seeking to prosecute Harrison for 41 offences – 39 counts of manslaughter, which carries a maximum sentence of life imprisonment, one human trafficking offence, and one count of assisting unlawful immigration.

Harrison’s lawyers claimed there were “manifest errors” in the original warrant.

They contend that when additional information was sought from UK authorities, it was provided by the CPS, when it should have been issued by a judicial authority – namely a judge in Essex.

Judge Binchy said there is a need to explore the points raised in a higher court.

He formally made an order granting Harrison’s extradition to the UK, but placed a stay on the execution of that order pending the outcome of the Court of Appeal proceedings.

He said: “I formally place a stay on the execution of the order pending the appeal.”

Harrison, who is represented in court by senior counsel Siobhan Stack and junior counsel Tony McGillicuddy, has 14 days to lodge his appeal with the Court of Appeal.

Dressed in a purple jumper and jeans, he gave a thumbs up to solicitor Paul Tiernan after the ruling was delivered on Wednesday morning.

He was further remanded in custody pending the appeal.