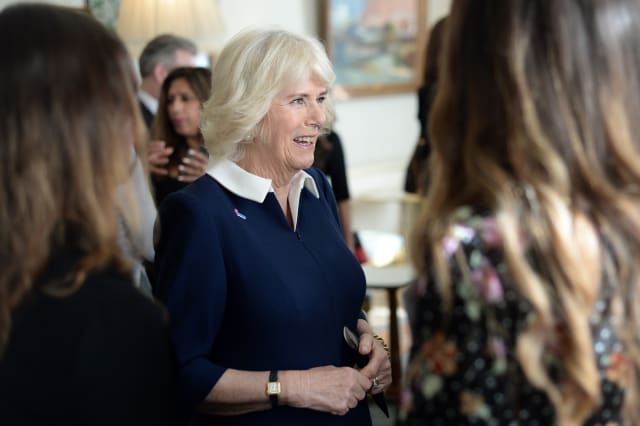 The Duchess of Cornwall has revealed she advised a parent whose daughter was the victim of domestic abuse, telling them: “It’s OK you can talk about it”.

Camilla’s spoke about her support for the unnamed person when she met survivors of abusive partners during a Clarence House reception celebrating the 15th anniversary of the charity SafeLives.

The charity provides a range of services for those who have endured domestic abuse and works with other organisations with the ultimate aim of eradicating the issue.

The duchess chatted to SafeLives pioneers Rachel Williams, who has written a book about her harrowing experiences at the hands of an abusive husband, and Celia Peachey, whose mother was murdered by an ex-partner with a history of violence and domestic abuse.

Ms Peachey said after chatting to Camilla: “She said someone opened up to her about their daughter being in that position and she was able to say to them ‘it’s OK you can talk about. It’s safe and it’s important that you do’.”

During a 2016 visit to SafeLives Camilla heard the traumatic stories of survivors and was left in tears by Ms Williams’ experiences.

She suffered 18 years of abuse before her husband shot her after she filed for divorce, and Ms Williams’ teenage son committed suicide a few days after she was discharged from hospital.

Ms Peachey added: “What I’ve sensed is that she can relate to people because having experienced more awareness around the topic now, you can have a response and be reassuring, comforting, all of that because you understand some of the complex dynamics.

“Before SafeLives she said it wasn’t in her awareness and now she has an understanding she can use to help other people when they feel they have something to share on that topic.”