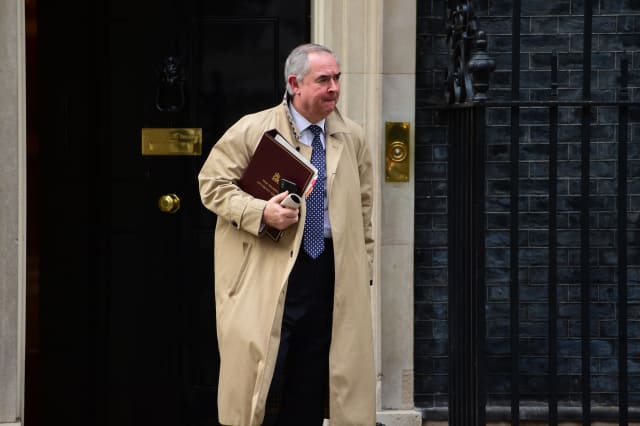 Geoffrey Cox has warned of a decline in legal experience among MPs as he made a thinly-veiled plea to the Prime Minister to keep him as Attorney General in the forthcoming reshuffle.

The Government’s most senior lawyer has been tipped as one of those who could lose their job when Boris Johnson remoulds his Cabinet on Thursday.

But he said he would “eagerly” embrace the opportunity to continue in his post if spared by the PM – describing the role as the “greatest honour of my professional life”.

Mr Cox told an event at the Institute for Government in central London: “Have I had enough of the job? Let me make plain: Absolutely not. This has been one of the greatest, in fact the greatest honour of my professional life.

“If you gave me the opportunity to continue I would embrace it eagerly but equally if it is not to be, well then there are other doorways that will open for me.”

Mr Cox warned that political life is not currently attracting senior lawyers, after he said the post of Attorney General should be held by someone who has spent a “good portion of their life in the practice of the law”.

He said that while he believed there are MPs who have sufficient experience, “there are perhaps fewer than there used to be”.

“And on that question it is vital that we should encourage more to go into the Commons.”

Mr Cox dismissed suggestions that he may be moved because of reports that he was not seen as a team player.

“It’s been an enormous privilege to do this job, and (it is) the Prime Minister’s complete prerogative to decide which team he puts around him,” he said.

“And if I were not to be Attorney General shortly then I do not believe it would be for any such reason.”

Dominic Cummings had reportedly been seeking a wider cull of ministers and a shake-up of Whitehall departments than is now expected to be delivered, with one Number 10 source suggesting a more “conventional” reshuffle was planned.