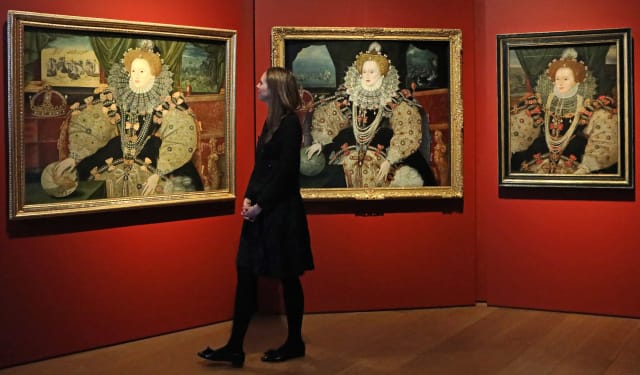 Three surviving paintings of one of the most famous portraits of Queen Elizabeth I are to go on public display together for the first time in their 430 year history.

Painted to commemorate the failed attempt by the Spanish Armada to invade England in 1588, the images were curated by an unknown artist during the height of her power.

Copies of the portrait have been made over the centuries but the three that will be “united” at the ‘Faces of a Queen: the Armada Portraits of Elizabeth’ exhibition at Queen’s House, Greenwich, south-east London are the only known contemporary versions in existence.

Royal Museums Greenwich will showcase their own version of the Armada Portrait alongside the two other works – one from the National Portrait Gallery, the other from the private art collection at Woburn Abbey.

Allison Goudie, curator of Pre-1800 art at Royal Museums Greenwich, said it was a “once-in-a-lifetime opportunity to come face to face with Elizabeth like never before”.

Describing the context behind the paintings, she said: “It’s a bit of an elaborate fiction because in actual fact the Armada was defeated largely by matters of weather and by chance but nonetheless it was celebrated as a tremendous victory for Elizabeth.

“And in these portraits Elizabeth is positioned really at the centre of the action almost like this celestial and divine presence.”

The versions of the portrait, each offering a different depiction of the Queen “turning her back to the Spanish fleet,” will be side by side at the free exhibition from February 13 to February 31.

Ms Goudie revealed that Elizabeth “almost certainly” did not sit for the paintings personally but it is thought they were all based on a miniature artwork painted by one of her favourite artists – Nicholas Hilliard.

She explained that different studios and artists could have created multiple images using the picture pattern from Hilliard’s original miniature.

“And that’s how we’ve ended up with three like this. We can’t even say for certain who painted any of these which is quite a different way of thinking of art in the 21st century,” she said.

Each has minor differences, such as in the seascapes painted in the windows behind the monarch and the details and colours on her gown and jewels.

Royal Museum Greenwich took ownership of its Armada Portrait in 2016 after a successful £10.3m fundraising campaign to buy the painting from descendants of Sir Francis Drake.

It included £7.4m from the Heritage Lottery Fund.