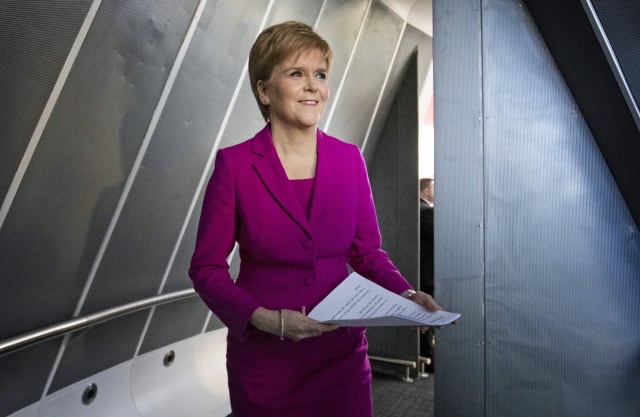 Funding for a proposed bridge between Scotland and Northern Ireland should be sent to Holyrood and Stormont instead, Nicola Sturgeon has said.

Speaking at a conference in London to discuss the lead-up to the COP26 climate summit in Glasgow in November, Scotland’s First Minister suggested the bridge would likely never be built but said she would like to see how far Boris Johnson can get with the plans.

The Prime Minister said on Monday that work is under way to establish the feasibility of a road crossing between Portpatrick in Scotland and Larne in Northern Ireland.

Ms Sturgeon raised questions about the section of the Irish Sea where the proposed bridge will cross, which is reportedly a major munitions dump.

She also said the administrations in Scotland and Northern Ireland could benefit in the immediate future from a portion of the £20 billion it would cost to build the crossing.

The First Minister said: “If you’ve got £20 billion available to build a bridge, I’m pretty sure me and I’m sure equally the First Minister of Northern Ireland would be able to find things to spend that on right now that actually would be really useful to accelerate the progress to net-zero.”

Addressing the Prime Minister directly, she added: “I’m happy to take the £20 billion, Boris, but maybe not spend it on your latest bridge.”

Ms Sturgeon brought up the scrapped Garden Bridge project, which gained traction during the PM’s tenure as Mayor of London before being shelved.

Following her speech, in which the First Minister said the transition to a low-carbon economy could not “leave communities behind” in the same way as deindustrialisation had in the last century, she said: “I’m really ambitious about Scotland and our connections and our closest neighbours in the rest of the world.

“I think to say there are some big questions around the feasibility and deliverability of the suggested bridge between Scotland and Northern Ireland would be an understatement.

“Far be it from me to point out that this would not be the first bridge that Boris Johnson has promised and failed to deliver so he has something of a track record.

“If he wants to prove that this can be done and its feasible and deliverable then let’s see how far he can get with it.”