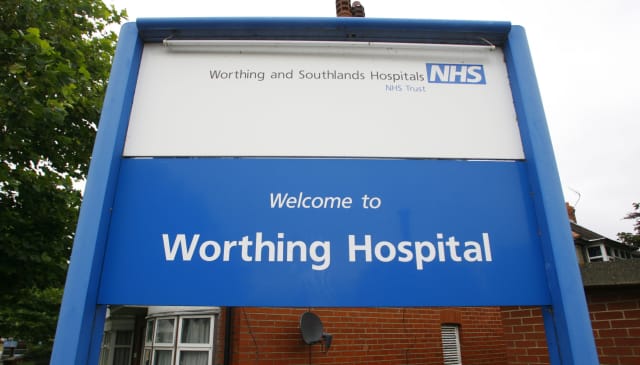 A healthcare worker at Worthing Hospital is among the eight confirmed cases of coronavirus in the UK.

Staff at the West Sussex hospital received a memo on Tuesday telling them a member of staff working in the A&E department had been diagnosed with the disease.

A spokeswoman for the Department of Health said that all services at the hospital, including surgery and out patients, are operating normally.

It is understood the healthcare worker at Worthing Hospital is not the same person as the locum doctor working in Brighton, who is also one of the eight cases.

Meanwhile, it is understood two prisoners at HMP Bullingdon in Oxfordshire are being tested for the illness and are being held in isolation.

One of the men is understood to have been recently transferred from a Thai jail.

They are both reported to be suffering flu-like symptoms.

As of Tuesday evening, a total of 1,358 people have been tested for coronavirus in the UK, of which 1,350 were confirmed negative and eight positive, the Department of Health said.

On Tuesday, the Prime Minister praised the response of the NHS and said anyone concerned should "simply follow their advice".

Speaking in Birmingham, Mr Johnson said: "We are a great country, we have got a fantastic NHS, we have got fantastic doctors and advice, and they should simply take the advice of the NHS.

"People have every reason to be confident and calm about all that kind of thing... all the coronavirus, and any threats from disease."

It came as Steve Walsh, the businessman at the centre of a UK outbreak of coronavirus, thanked the NHS for his treatment and said he is "fully recovered".

Mr Walsh, 53, from Hove in East Sussex – who is still in quarantine at St Thomas' Hospital in London, picked up coronavirus while at a conference in Singapore.

He is also linked to at least five further cases of coronavirus in the UK, including the doctor working at the Brighton surgery.

A source told the PA news agency that the doctor, acting as a locum at County Oak Medical Centre, had only carried out one day of admin work there recently and had not had any direct contact with patients.

A second branch of the surgery also closed, but Brighton and Hove City Council confirmed they would reopen soon following "deep cleaning".

Mr Walsh is also linked to one male patient who was taken ill in Majorca.

Speaking from hospital, Mr Walsh, a cub scout leader, said in a statement: "I would like to thank the NHS for their help and care – whilst I have fully recovered, my thoughts are with others who have contracted coronavirus.

"As soon as I knew I had been exposed to a confirmed case of coronavirus, I contacted my GP, NHS 111 and Public Health England.

"I was advised to attend an isolated room at hospital, despite showing no symptoms, and subsequently self-isolated at home as instructed.

"When the diagnosis was confirmed I was sent to an isolation unit in hospital, where I remain, and, as a precaution, my family was also asked to isolate themselves.

"I also thank friends, family and colleagues for their support during recent weeks and I ask the media to respect our privacy."

A spokeswoman for the Scout Association said Mr Walsh had not been to any Scout meetings since his return to the UK, and wished him a quick recovery.

It comes as the World Health Organisation announced a name for the new coronavirus – Covid-19.

Dr Tedros Adhanom Ghebreyesus told a press conference a name was decided that "did not refer to a geographical location, an animal, an individual or group of people, and which is also pronounceable and related to the disease".

Also on Tuesday, Health Secretary Matt Hancock told MPs in the Commons that new funding was being launched immediately "to support any urgent works the NHS needs for the coronavirus response, such as the creation of further isolation areas and other necessary facilities".

He added: "I should say that the people who are of concern are those who have had very close contact with somebody with coronavirus, face-to-face contact or within a two-metre range for 15 minutes or more."

Prof Cosford said PHE was working to trace the small number of contacts of the two doctors, including a Brighton GP, who were among the four new cases announced on Monday.

In Brighton, Patcham Nursing Home said on Tuesday that it has "closed to all visitors" after one of the infected GPs visited a patient there about a week ago.

A spokeswoman for the care home said no one was unwell and the closure was a precaution.

Another surgery in Brighton, The Haven, said it was closed "due to unforeseen circumstances", although there was no confirmation whether it was linked to the outbreak.

Meanwhile, pupils at Cottesmore St Mary's Catholic and Bevendean Primary School in Brighton were told they could stay at home after a couple of teachers feared the had come into contact with the virus.

Earlier, Dr Ghebreyesus, director-general of the World Health Organisation, described the outbreak as "a very grave threat for the rest of the world".