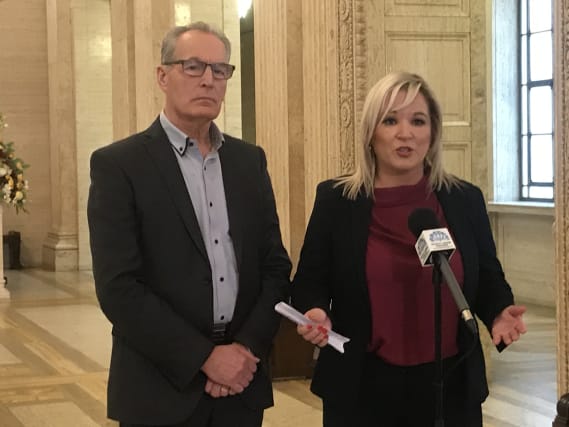 Sinn Fein vice president Michelle O’Neill has said she will not be deterred after learning of a dissident plot against her.

The deputy First Minister said she had been told by the Police Service of Northern Ireland (PSNI) that they have received intelligence of a plan by dissidents to attack both her and Sinn Fein MLA Gerry Kelly.

Speaking at Parliament Buildings in Belfast, Ms O’Neill said they are both taking precautions as a consequence, and vowed to protect their families.

“I have been told by the PSNI that they have intelligence that dissident republicans are planning an attack against myself and Gerry Kelly,” Ms O’Neill said.

“But we have a job to do, we are elected, we have a mandate, we want to bring about change. We are trying to build a better society and we will not be deterred by people who do not have a strategy to move forward in terms of the Irish Republican project.”

Police told them about the threat on Tuesday.

It comes after a weekend of significant gains for Sinn Fein in the Irish general election, and also a week after Ms O’Neill and Mr Kelly attended a PSNI event.

“We are also aware this comes on the back of both myself and Gerry attending the PSNI recruitment fair last week,” Ms O’Neill said.

“So let me be very clear, dissident republicans have no strategy, they have no plan, they have no progress towards Irish unity and I think this intelligence comes at a time when we have never been closer to Irish unity.