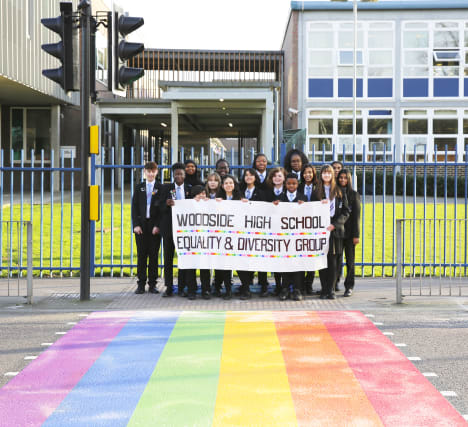 A school that has received “over 200 abusive messages” about a rainbow-coloured road crossing has vowed to continue its work supporting equality.

The crossing was installed outside Woodside High School, in London’s Wood Green, last week to mark LGBT+ History Month after a campaign from its students.

And while the move received dozens of supportive messages online, the school revealed in a tweet it had received over 200 abusive messages in four days.

Woodside High head Gerry Robinson said: “The hundreds of abusive messages regarding Woodside’s work on equality will not deter us from continuing our work.

“In fact, it only encourages us further for we do not want our students to go out into the world and face such hate.

“Never has there been a more important time to stand up to hate in all its forms and education is a key part of that.”

The school said the abusive messages had been received online and they are not understood to have come from parents of students.

Woodside has received support from Haringey Council, which funded and installed the crossing.

Seema Chandwani, the council’s cabinet member for neighbourhoods, said: “There is absolutely no place for division in our borough.

“We’re very proud of these young people for lobbying so strongly about an issue that really matters to us all.

“We stand in solidarity with them, and the LGBTQ+ community here in Haringey and beyond, against discrimination and prejudice of any kind.”

The school has a long history of campaigning on LGBT issues.

In 2017 it was awarded the Stonewall School Champion Gold award, in recognition of the school’s work to tackle homophobic, biphobic and transphobic bullying.

The rainbow crossing, installed on February 5, is the first of its kind outside a school in the UK, Ms Robinson said.

She added: “This rainbow crossing stands for our commitment to championing equality, for our children’s rights to be respected and able to thrive as themselves, in school and beyond.”