Queensferry Crossing could remain shut until Wednesday amid severe weather 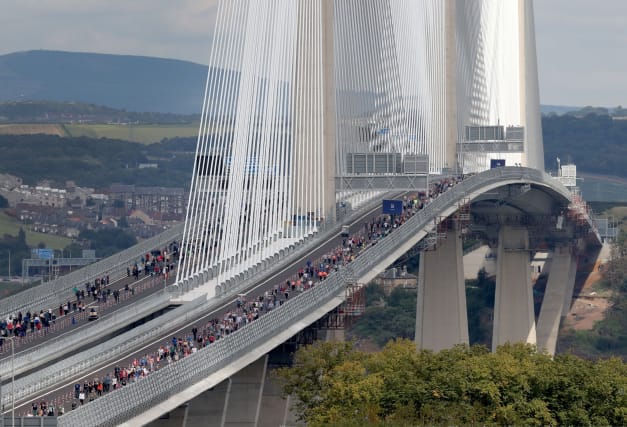 The Queensferry Crossing may remain shut until Wednesday due to severe weather, with eight cars damaged in the “unique conditions”.

Operator Amey said the key route would be closed until further notice as a safety precaution due to ice falling from the cables.

Motorists travelling southbound were advised to divert via the A985 to the Kincardine Bridge and the M9, and the reverse for northbound traffic.

The bridge is expected to remain shut throughout the Tuesday morning rush-hour.

Mark Arndt, of Forth Bridges Unit with Amey, told BBC Radio Scotland’s Good Morning Scotland that the closure was caused by a “unique set of weather conditions”.

He said: “We had a combination of strong westerly winds … a mixture of snow and sleet that resulted in snow accumulations on the main cables of the Queensferry Crossing.

“At an elevated height, that snow accumulation became chilled.

“It accumulated in a reasonable size and fell to the carriageway. And it was on the grounds of safety that we took the decision to close the bridge.”

He added that conditions will be monitored throughout the day and the crossing will be reopened as soon as possible.

But Mr Arndt warned that that may not happen until at least Wednesday.

Up to eight vehicles were damaged as a result of the ice falls, but there were not thought to have been any major injuries.

A Transport Scotland spokeswoman said: “The Deputy First Minister and Transport Secretary were briefed on the closure of the Queensferry Crossing.

“They have been brought up to date on the efforts of the operating company, who are constantly monitoring the structure.

“Our immediate priority is the safety of bridge users and we remain focused on that while we assess the situation to enable the bridge to reopen as soon as possible.

“Any wider investigations can take place once the bridge is reopened.”

Scotrail has put extra services in place to assist with problems caused by the road bridge’s closure.

Met Office yellow warnings for snow and ice remain in place through to Wednesday.

The M74 was closed southbound on Tuesday morning due to an overturned vehicle.

Diversions were put in place at junction 11.

Cross-border rail services were hit by a landslip between Kilmarnock and Dumfries, forcing the closure of the Glasgow Central to Carlisle line via Dumfries.

Trains will start from Kilmarnock until the route is safe.

The conditions also affected the West Highland Line and Airdrie to Balloch service, while buses replaced trains between Dumfries and Carlisle.

More than a dozen ferry services were cancelled on Monday due to the high winds, with others delayed or rescheduled.

On Tuesday morning, nine out of 28 services were cancelled amid poor weather, with the remainder delayed or rescheduled.

Meanwhile, four people had to be rescued from Ben Nevis in the Highlands after getting caught in “horrendous” blizzard conditions without the proper kit.