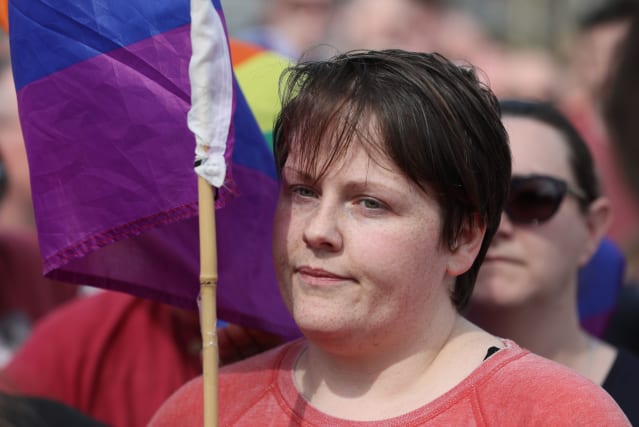 The partner of murdered journalist Lyra McKee has explained how she wanted to use her grief to “make a difference” while championing same-sex marriage in Northern Ireland.

Sara Canning called the landmark law change “phenomenal”, as a Belfast couple became the first same-sex couple to wed in the region on Tuesday.

Ms Canning will be among activists, MPs and campaigners from the Love Equality campaign celebrating at a parliamentary event in Westminster.

Ahead of the London event, Ms Canning told the PA news agency that campaigning had been “massively helpful” while grieving for Ms McKee.

The 29-year-old journalist and author was shot dead as she observed rioting in Londonderry on April 18 last year.

She revealed to a close friend plans to propose to Ms Canning, 36, just hours before she was murdered.

“It has been massively helpful to channel my feelings into this, because the alternative was lying down under it, or allowing the anger to be used in a way that isn’t constructive,” she told PA.

“At least, speaking out about these things, it’s something that can be changed. And the platform was huge, because it was such an awful tragedy.

“So I felt the need was there to speak about something that maybe a difference could be made.

“And we could see something that Lyra and I were passionate about coming to fruition.”

Same-sex marriage was legalised in Westminster by MPs who stepped in and acted on the controversial issue during the powersharing impasse at Stormont.

It followed a long and high-profile campaign for reform.

Ms Canning, from Derry, said campaigners, same-sex couples and their allies in Northern Ireland owe Westminster MPs “a massive debt of thanks”.

“When Conor McGinn, who is a Northern Irish lad by birth, when he took this up and Lord Hayward again carried it through the Lords, it was just such a phenomenal thing,” she told PA.

“It felt as if we were getting somewhere and then we did.

“I’m sure you’ve seen the scenes of absolute jubilation in Belfast and across Northern Ireland, it’s just that feeling of knowing equality is coming.

“And that’s something that is massively important. They say equality is the best therapy and I would agree with that, 100%.”