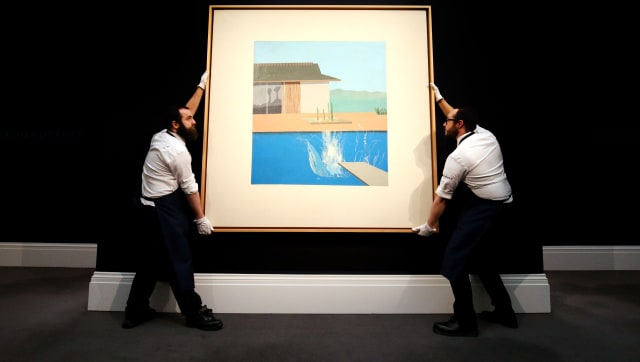 David Hockney’s The Splash has sold for more than £23 million at auction.

The 1966 piece by the Bradford-born artist depicts the spray from a dive into a pool on a perfect blue California day.

It last sold at Sotheby’s in 2006 for £2.9 million and returned to the same auction house on Tuesday evening as the star piece in its Contemporary Evening Art Auction.

The painting sold for £23.1 million – more than eight times the 2006 figure and the third highest price ever achieved for a Hockney at auction.

The piece is the second of Hockney’s three “splash” paintings, in which he gave free rein to his lifelong fascination with the appearance of water.

Hockney, now 82, said of the works in 1976: “I love the idea, first of all, of painting like Leonardo, all his studies of water, swirling things.

“Everyone knows a splash can’t be frozen in time, so when you see it like that in a painting it’s even more striking than in a photograph.”

The first work, A Little Splash, is held in a private collection, while the third, A Bigger Splash, belongs to the Tate collection.

Emma Baker, head of Sotheby’s Contemporary Art Evening Sale, said: “Not only is this a landmark work within David Hockney’s oeuvre, it’s an icon of Pop that defined an era and also gave a visual identity to LA.

“Even looking beyond the twentieth century, few artworks have attained as mythic a status as this painting.

“Equally as recognisable as Munch’s series of screams, Monet’s water lilies or Van Gogh’s flowers, Hockney’s splash is ingrained within our cultural imagination.”

Earlier in the evening, Banksy’s Vote to Love, which features a balloon heart dotted with sticking plasters covering the O of the Vote to Leave campaign poster, sold for £1.2 million.

The piece was jokingly priced at £350 million – a reference to the Leave campaign’s claim printed on the side of a bus reading “We send the EU £350 million a week, let’s fund our NHS instead”.

In 2018, Banksy’s Girl with Balloon shredded just moments after the Sotheby’s auctioneer brought the hammer down at more than £1 million.

Despite its ruined state, the buyer decided to go ahead with the purchase, saying they had realised “I would end up with my own piece of art history”.