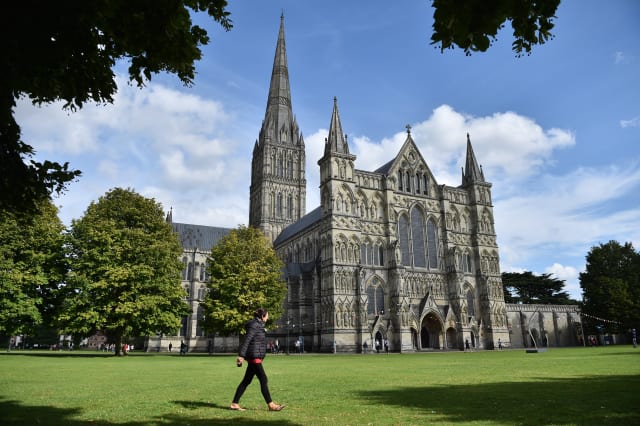 An 800-kilo piece of rock has been blessed as it started its journey to become a carved stone celebrating 800 years of a famous cathedral.

The Very Revd Nicholas Papadopulos, the Dean of Salisbury, travelled to a quarry in Wiltshire to select the stone and consecrate it.

Masons will carve and fix it onto the east end of the building to mark the anniversary of Salisbury Cathedral moving from Old Sarum in 1220.

The piece of Upper Jurassic limestone was taken from same seam that provided the original stones used to construct the 800-year-old building.

The 150 million-year-old stone will be blessed three times and the first took place on Tuesday in Chicksgrove Quarry.

It was then lifted onto a flatbed truck and driven the 12 miles to the cathedral’s works yard where it will be carved.

From there the stone will be taken to Old Sarum, where the Bishop of Salisbury, clergy and congregations from across the city will come together for a special service on April 25.

After a second blessing the stone will be carried back down the hill and placed in the cathedral.

A third and final blessing will take place during a service celebrating the 800th anniversary on April 28.

Masons will then hoist the stone up the scaffold on the east end, where it will be fixed in place.

Revd Papadopulos said: “Whilst it is wonderful to have a year of celebrations shared across the city, we also wanted to trace that journey of faith that is personal to the cathedral.”

Gary Price, clerk of the works at the cathedral, said: “Any mason who has ever worked on this building joins a ‘family’ going back generations, sharing ancient skills and learning from the work left by those who went before.

“In the stonemasons and glazing shops we are reminded daily of just what the cathedral builders achieved. The endurance of their skills.

“What better way to celebrate the building they created than by creating a stone to place within these walls?”

James Hart, from quarry owner Lovell Stone Group, added: “Our Chicksgrove limestone dates from the latter part of the Jurassic period, around 145 million years old, and has been used extensively in the renovation and restoration of Salisbury Cathedral.

“We are extremely proud to have the commemorative stone blessed by the Dean of Salisbury and to play a small role in the lasting historical significance of this special celebration.”

Salisbury is unique among English cathedrals in having moved from one location to another and this move was the catalyst for the city to develop.

The move from Old Sarum was politically, logistically and commercially audacious, made in defiance of the Kings’ men, with an ambitious building plan that would challenge even modern, technologically advanced builders.

More than 50 years later the cathedral boasted a 123-metre spire – the tallest medieval spire in the country.