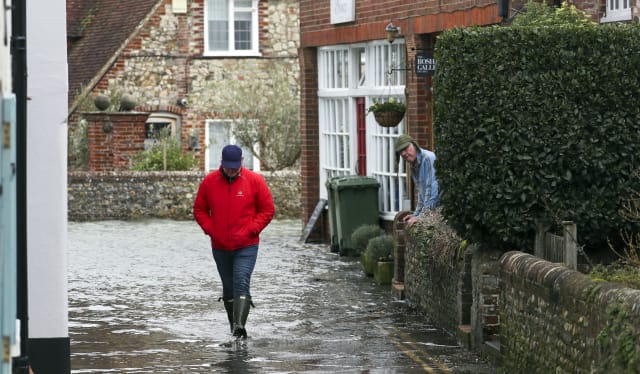 Businesses clearing up after the second bout of serious flooding in four years have joined MPs in calling for more help for inundated areas.

Hundreds of householders and small business owners across England and Wales were spending Tuesday gutting their premises after water more than 4ft (1.2m) deep in places surged through towns and villages on Sunday.

The clean-up operation was continuing in freezing conditions as rain and wind gave way to hazardous amounts of snow and ice across the UK.

And the Met Office said on Tuesday that another named weather system – Storm Dennis – is set to bring more very wet and windy weather at the weekend.

Anger in drenched villages like Mytholmroyd, near Halifax in West Yorkshire, mounted as MPs queued up in the Commons to demanded reassurances that the same fate would not reoccur in coming months and years.

Tory MP Philip Davies branded it “completely unacceptable” that many of his constituents in Shipley,  West Yorkshire, flooded during Storm Ciara were also victims of the 2015 Boxing Day floods.

Mr Davies told Environment Secretary Theresa Villiers on Monday: “Many of my constituents who were flooded over the weekend are exactly the same people who were flooded on Boxing Day in 2015, which really is completely unacceptable.

“Can she assure me that the flood defence programme that the Government has in place will ensure that my constituents in Shipley won’t have to suffer this fate yet again?”

Halifax’s Labour MP Holly Lynch said there was a “sense of absolute devastation” that “for so many residents we are in the same position again having flooded in 2015” as she reeled off a list of those affected locally including 400 residential properties, 400 businesses, eight schools and two care homes, as well as two damaged bridges.

The streets of Mytholmroyd were inundated by 4ft (1.2m) of water on Sunday.

Cafe owner Lisa Thwaites described how she found herself thigh-deep in water in just 10 minutes and ended up climbing over the back wall of her property to escape the flood as she desperately tried to save furniture and stock.

Ms Thwaites, who has run the Blue Teapot for six months, said: “I’ve got to get the business back up and running. I’ve got no choice.

“I gave up a good corporate job to do this and it was my dream to open a cafe.

“Now it’s worth nothing but I’ve no choice but to get it going again.”

Ms Thwaites said: “People have been amazing, ringing me up and offering money. I’m not comfortable with that but I might have to take it.”

After the December 2015 floods, a £30 million flood prevention scheme was begun in Mytholmroyd, which is due for completion in the summer.

Ms Thwaites said there was concern that some of Sunday’s inundation came through gaps left in the flood wall due to the construction work.

She also said that water cascaded off the surrounding hillside and became trapped on the village side of the flood barrier, leaving the water on the main road higher than in the River Calder.

The clear-up operation continued as the rain and wind from Storm Ciara gave way to snow and ice across the country.

Heavy snow fell in some regions after the storm disrupted flights, ferries and trains throughout Britain and the Republic of Ireland.

A yellow weather warning for snow was issued for parts of the Midlands and eastern England, and snow began to fall across the north Midlands and the south Pennines on Monday afternoon.

A yellow warning for heavy snow and strong winds is in place for Northern Ireland and most of Scotland, while a yellow warning of snow and ice is in force for north-west England on Tuesday.

Forecasters said some areas could see blizzards with up to 7.9in (20cm) of snow.

Chief Meteorologist Steve Ramsdale said: “Another spell of very wet and windy ​weather is expected for Saturday. Although Storm Dennis is currently not expected to be as severe as Ciara, disruption is still likely.

“Our confidence in the forecast means we have been able to issue severe weather warnings well in advance, giving people time to prepare for potential impacts of the storm.”

Meanwhile, the Government has activated an emergency financial aid package for areas devastated by Storm Ciara.

Environment Secretary Theresa Villiers told MPs that more than 500 properties are believed to have been flooded during Storm Ciara, with the number expected to rise further.

“The latest number of properties confirmed to have been flooded are 40 in Cumbria, 100 in Lancashire, 150 in Greater Manchester and 260 in Yorkshire.”