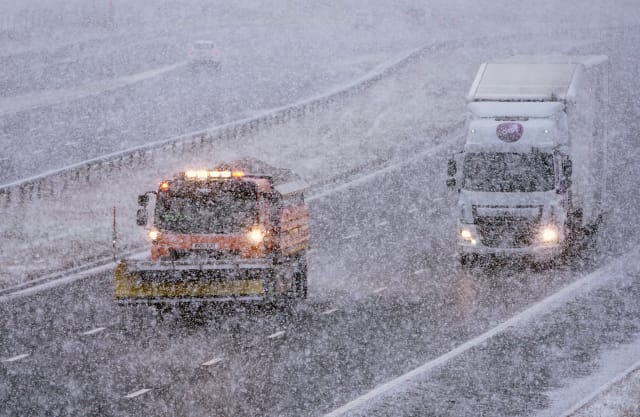 Transport has been disrupted as snow and strong winds hit Scotland in the aftermath of Storm Ciara.

Wintry conditions on the roads hit rush hour drivers on Monday morning, while train and ferry services were also affected.

Authorities had warned there may be "significant disruption" to transport on Monday while "frequent lighting strikes" may interrupt power supplies.

The Met Office has issued yellow warnings of snow and wind across most of Scotland on Monday and Tuesday, with gusts of up to 60mph possible.

Forecasters said strong winds could lead to blizzard conditions while there may be up to 20cm of snow by Tuesday evening over the highest routes.

Cross-border train services were hit due to severe flooding on the west coast mainline near Carlisle, with replacement buses in place between Carlisle and Glasgow.

The wintry weather also affected other train routes in Scotland in the morning, including the West Highland Line and Airdrie to Balloch, while buses replaced trains between Dumfries and Carlisle.

Heavy snow showers caused problems on some roads, with traffic restricted to one lane on the M90 at Kelty in Fife and blizzard conditions reported on the M74 at Beattock.

Further north on the M74, five people were injured in a crash involving three cars and a lorry.

The motorway was closed northbound between Junction 6 and Junction 9 after the accident between the Larkhall and Hamilton turnoffs shortly after 9am. It was later reopened.

Elsewhere, more than a dozen ferry services were cancelled due to the high winds with others delayed or rescheduled.

It comes after Storm Ciara battered the country with high winds and heavy rain over the weekend, which led to flooding, damage to buildings and transport disruption.

The Met Office warning states: "Frequent and heavy snow showers will affect the region throughout Monday and Tuesday.

"Snow showers will occur especially over high ground, giving slight accumulations of one to three centimetres above 150 metres and five to 10cm above 300 metres.

"Snow will gradually build up and in a few locations, accumulations of over 20cm are possible by Tuesday evening over the highest routes in Scotland.

"The height of the snow level will vary throughout the period, but it is likely that any snow accumulations at low levels will only be temporary.

"Strong winds, gusting 50-60 mph, will lead to blizzard conditions at times and considerable drifting of lying snow over high ground."

Transport Secretary Michael Matheson said there is the potential for "significant disruption" to travel.

He said: "It's important that people check the latest information before they set off, drive to the conditions and follow Police Scotland travel advice.

"The Traffic Scotland service gives details of wind-based closures for the bridges on trunk road network, allowing people to plan ahead accordingly.

"Motorists should check Traffic Scotland before they set off to make sure that their route is available."

Over the weekend Storm Ciara caused disruption across Scotland with high winds and heavy rain.

In Hawick in the Borders, a guest house and bistro collapsed into the River Teviot on Sunday, though no-one was injured.

Heavy rain resulted in flooding in the Whitesands area of Dumfries after the River Nith burst its banks.

On Saturday, three people were injured after part of a pub roof collapsed in Perth.

Emergency services were called to the scene at The Venue in St John Street, Perth, at around 7.25pm on Saturday.