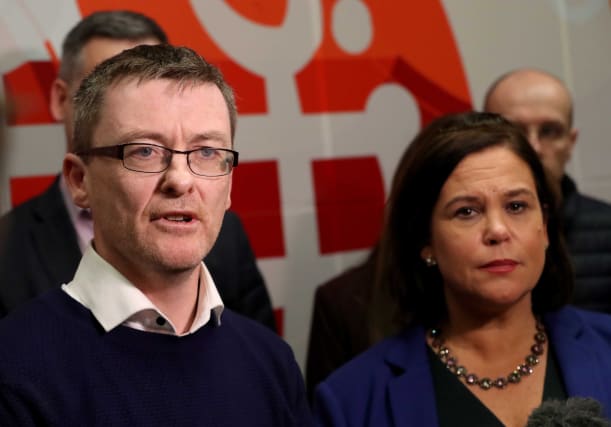 A Sinn Fein TD who was filmed shouting “Up the ‘Ra” during a victory speech has defended the comment, saying it happened during “the excitement of the night”.

Waterford TD David Cullinane was recorded making the comment as he spoke to supporters hours after he was elected.

He said Sunday was a “very emotional day” for him but that the comments were not about the future.

The short clip was posted on social media on Monday.

“Obviously we were very excited and very proud of the vote we got in Waterford,” Mr Cullinane said.

“He was someone that inspired me and inspired many republicans, the comments were made in that context.

“I know some people will think the comments were about the here and the now and the future, they weren’t.

“It was reflecting back on that time in Irish history that I’m proud of and those hunger strikers and it was I suppose part of the excitement of the night when we were celebrating that victory.

“My comments were about the past, they were not about the future, the IRA is gone as everybody knows.”

The party’s Brexit spokesman refused to apologise, saying he was “reflecting” on that time period.

He added: “We have a very successful peace process and what this election is about is the future and I think our focus now over the next while will be the talks that we will be involved and the issues that we campaigned on this election, and that’s the mandate that I got from the people of Waterford to try and deliver on the promises that we made.

“I don’t feel I have to apologise for reflecting back on that time period. What I’m saying is that I’m putting context on the comments that I made.

“I in no way meant that this was about the here and now or the future.

“I was reflecting back – if people saw the full clip – on what was a very emotional time for republicans and as someone who stood in a constituency that a hunger striker previously stood in, in the context of a long campaign, a long day, and a long night.

“I think that’s the context in which the comments were made, I think most people would see that, I certainly don’t set out to offend anyone, that’s not my style.

Mrs McDonald denied suggestions that the controversial video will hinder the talks process ahead.

“I do accept and we all accept that they can serve as a distraction,” she added.

“I’ve asked everybody not to be making throwaway comments or comments that can be misconstrued or distract us from the work ahead and I know that certainly that’s what happened in David’s case.”

Asked whether she has appealed to Sinn Fein TDs not to make any “throwaway comments”, Mrs McDonald added: “I’m not their mammy and I don’t censor them either.

“We’re all adults and I do expect people to behave in an adult way and to cooperate with their dear leader and not to create distractions.

“Let’s not get overexcited on this.”