Sturgeon stresses importance of close relationship with EU after Brexit 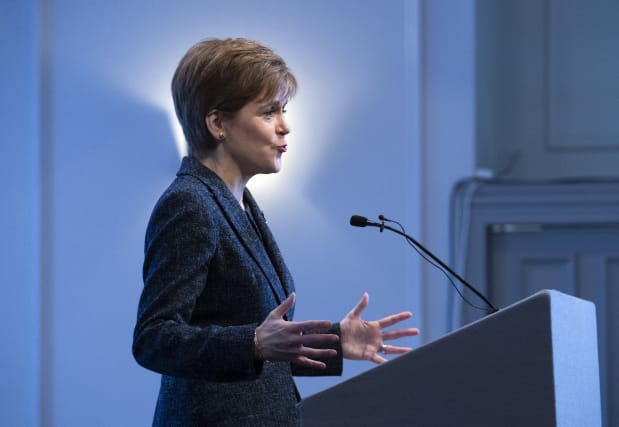 Scotland’s First Minister has warned of the cost of the UK diverging too far from EU regulations after Brexit.

Nicola Sturgeon told the European Policy Centre in Brussels that the Scottish Government would advocate for close alignment on standards, workers’ rights and environmental protections in the lead-up to the UK severing ties with the EU.

She also touted the idea of a “level playing field” –  regulatory alignment between the UK and EU.

Ms Sturgeon added Holyrood would look to use devolved powers to ensure a close relationship with the bloc in the future.

The First Minister told the assembled crowd: “We will try to influence negotiations in a way which benefits Scotland, the UK and the EU.

“In particular, we will stress the value of having as close a trading relationship with the EU as possible.”

The comments come after a speech by Prime Minister Boris Johnson in which he said the UK would “prosper mightily” from changing statutory standards – which the EU has said could limit access to the market.

Ms Sturgeon said: “The right to diverge will come at a cost – in my view a cost that is too heavy.

“As things stand, there is a danger that the UK will significantly reduce our access to the single market – something which will harm manufacturers and service industries across the country – because it wants the freedom to lower standards relating to health, safety, the environment and workers’ rights.

“The Scottish Government will argue against that approach. We largely support the idea of a level playing field – which removes the possibility of the UK adopting lower standards than the EU.

“Now, on past evidence, I must confess that I am not overly optimistic about our chances of success.”

The First Minister also said the Scottish Government would use available powers to “keep pace with EU regulations”.

She added: “It is a way in which we can protect the health and well-being of people in Scotland, maintain the international reputation of businesses in Scotland and make it easier, when the time comes, as I believe it will, for Scotland to return to the EU.”

The SNP leader went on to state her party would continue to push for Scotland to become an independent country, which would hope to rejoin the EU in the future.

In her speech, she said: “We are leaving the European Union, imperfect that it undoubtedly is, at a time when we have never benefited from it more.

“And we are also leaving it – in my view – at a time when we have never needed it more.

“In an age when intolerance and bigotry seems to be on the rise, the values of the EU – values of democracy, equality, solidarity, the rule of law and respect for human rights – are more important than ever.”