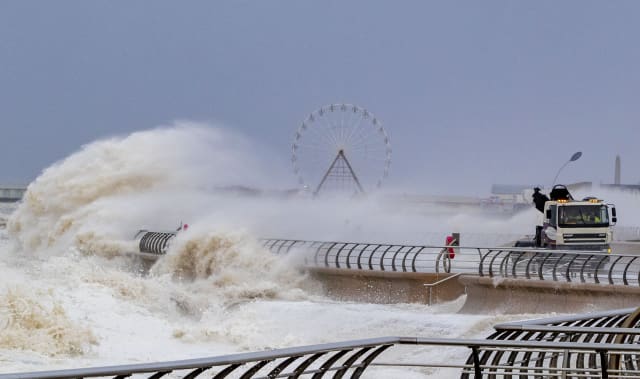 The effects of Storm Ciara continue to be felt as Sunday’s rain and wind gave way to hazardous levels of snow and ice across the UK.

Heavy snow fell in some regions after the storm disrupted flights, ferries and trains throughout Britain and the Republic of Ireland.

Met Office meteorologist Bonnie Diamond said: “Storm Ciara has cleared but it is still windy. There is the risk of snow and ice depending on where you are.

“There is very much hazardous weather still around.”

A yellow weather warning for snow was issued for parts of the Midlands and eastern England and snow began to fall across the north Midlands and the south Pennines on Monday afternoon.

A yellow warning for heavy snow and strong winds is in place for Northern Ireland and most of Scotland, while a yellow warning of snow and ice is in force for north-west England on Tuesday.

There is also a yellow snow and ice warning covering these regions on Wednesday, as snow showers and icy stretches could cause further disruption.

Forecasters said some areas could see blizzards with up to 20cm of snow.

There were also 70 flood warnings in place across England as of 3am on Tuesday.

Western Power Distribution – which covers the Midlands, the South West and South Wales – said more than 800 homes were still without power early on Tuesday morning, following outages caused by Ciara on Sunday.

UK Power Networks also said it had about 2,000 properties across the east of England without a supply, while Electricity North West also reported power cuts.

Meanwhile the Government has activated an emergency financial aid package for areas devastated by Storm Ciara.

This could be for items including rest centres, temporary accommodation and staff overtime.

Environment Secretary Theresa Villiers told MPs more than 500 properties are believed to have been flooded during Storm Ciara, with the number expected to rise further.

“The latest number of properties confirmed to have been flooded are 40 in Cumbria, 100 in Lancashire, 150 in Greater Manchester and 260 in Yorkshire.

“We urge people in at-risk areas to remain vigilant, not to take unnecessary risks and to sign-up to receive Environment Agency flood alerts.”

However multiple MPs took issue with the Government’s response, branding it “completely unacceptable” that many constituents flooded during Storm Ciara were also victims of the 2015 Boxing Day floods.

Trains were impacted while airlines operating to and from UK airports were also affected by the weather conditions, with more than 100 flights cancelled on Monday.