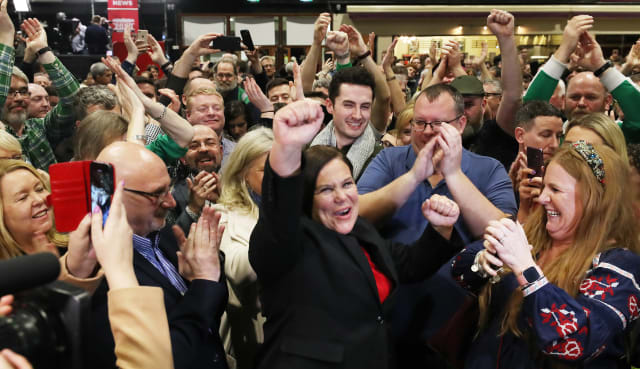 She pledged to get to grips with crises in housing and health and bring a new lease of life to public administration.

Counting of votes resumes on Monday in 26 constituencies to fill the remaining 82 seats.

Sinn Fein emerged as the most popular party in the country, securing the most first preference votes and topping the polls in the vast majority of constituencies across a state previously dominated by two other large parties.

It could be months before a Government is formed, Taoiseach Leo Varadkar said, with talks on forming a coalition set to begin between party leaders.

“A government that people relate to, that is in tune with the realities of people’s day-to-day lives, not one that is aloof and adrift from the experiences of citizens.”

Fianna Fail remains best placed to secure the most seats, primarily due to Sinn Fein’s failure to field enough candidates to capitalise on its unexpected surge at the polls.

Fine Gael looks like being the big loser and will concede several high profile-seats.

Its finance minister Paschal Donohoe said: “It is clear that no political party in our country has a monopoly on representing the people of Ireland.”

None of the parties will come close to securing enough seats to achieve a majority in the Dail parliament, so thoughts have already turned to the make up of a coalition administration.

Sinn Fein has been left to rue its decision to run half the number of candidates of its two main rivals.

That will see a significant number of Sinn Fein surplus votes being transferred to other parties in the proportional representation contest.

Smaller groupings such as the Greens, Labour, the Social Democrats and Solidarity/People Before Profit, and a sizeable number of independent TDs, may all be courted as the main parties seek junior coalition partners.

Mrs McDonald said: “This campaign has been about change and giving Sinn Fein a chance to demonstrate what it feels like when it is led by or has a party of the people in it, that has been the theme of our discussions and conversations.

On Sunday, Fianna Fail leader Micheal Martin declined to repeat his pre-election pledge never to do business with Sinn Fein.

Mr Varadkar said his party’s stance on not dealing with Sinn Fein was unchanged.

There are 160 seats in the Dail parliament. The speaker is automatically re-elected, leaving 159 seats up for grabs and 80 the magic number for a majority.