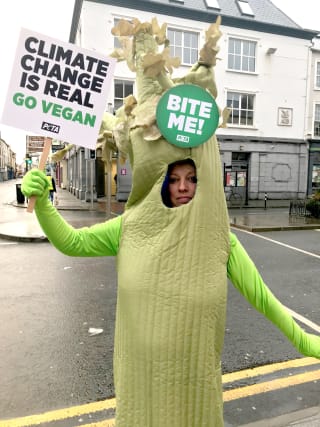 A Co Kerry politician who told a protester dressed as a stick of celery “to hell with the planet” has apologised for his remarks.

Independent TD Danny Healy Rae said he preferred to focus on the concerns of people of his constituencies rather than environmental issues.

A protester brandished a sign outside Kilgarvan Central School in Co Kerry saying: “Climate change is real, it’s an emergency, and we can all fight it by going vegan.”

“I’m not one of those people.

“I make no apologies to anyone, anywhere for that.

“And I stay with the people for as long as they want me.”

In a statement to Radio Kerry on Monday, he said: “If my comments offended anyone, I want to sincerely apologise for that.”

“Obviously I care about the planet as much as the people in it; the point I was trying to get across is, as much as we must mind the planet, we must be fair to the people.”

Mr Healy Rae has previously stated that he does not “subscribe to the idea that man can influence climate” while his brother, Independent TD Michael had previously said that he feels farmers are unfairly blamed for climate change.