Mary Lou McDonald says she could be next taoiseach 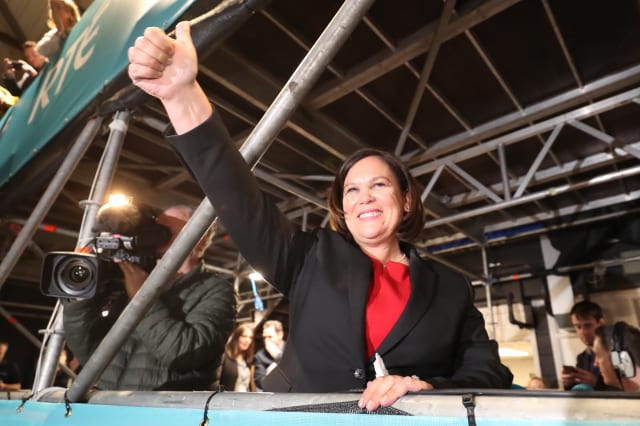 Mary Lou McDonald has predicted she could be poised to become Ireland’s next leader.

The Sinn Fein president insisted she may lead a new government as taoiseach as her party continued to bask in a remarkable General Election result that saw it top the popular vote, shattering Fianna Fail and Fine Gael’s long time grip on power.

On an impromptu walkabout in Dublin city centre, Mrs McDonald said: “I may well be the next taoiseach, yes.”

The party failed to run enough candidates to capitalise on its surging popularity in Ireland, so it will not finish up with the most seats.

Fianna Fail is on course to be the largest party though Sinn Fein could finish in second place behind outgoing Taoiseach Leo Varadkar’s Fine Gael, which is the big loser of the poll.

All three parties will fall well short of reaching the 80 seats required for a Dail majority so, barring another election, some form of coalition is inevitable.

The task of forming a government could be a long and tortuous one and may force either Fianna Fail or Fine Gael to back-track on long-standing pledges never to do business with Sinn Fein.

Jim O’Callaghan also insisted his party leader, Micheal Martin, had not softened his stance on ruling out the party as government partners.

“We need to recognise we gave a commitment and when you look at the policy differences between Sinn Fein and Fianna Fail, I don’t think it’s tenable to suggest that we should be in coalition with them,” he said.

Mr O’Callaghan’s views are not echoed by all his colleagues, with some Fianna Fail members having indicated a willingness to do business with the party.

Mrs McDonald’s preference is for a coalition of left-wing parties, without any input from the centre right Fianna Fail and Fine Gael.

However, it is doubtful whether such an alliance could generate the sufficient numbers for a majority.

Another permutation could see the exclusion of Sinn Fein, with Fine Gael and Fianna Fail entering power together in a so-called “grand coalition”, though that prospect looks unlikely at this stage.

Smaller parties and groupings such as the Greens, Labour, the Social Democrats and Solidarity/People Before Profit, and a sizeable number of independent TDs, may all be courted as the main parties seek junior coalition partners.

Mrs McDonald has pledged to work to form a “people’s government” and get to grips with crises in housing and health – the issues that featured so prominently on the campaign trail.

“This election has certainly been seismic and historic, it’s been an election that’s really been driven by a demand for change by the people,” she said.

“Sinn Fein won the election, we won the popular vote, we’ve recorded an historic victory for our party but the election is much more than that.

“The election is about a real appetite for political change, and that means a change in government.

“We asked the people to vote for Sinn Fein, the chance to demonstrate what government looks like when citizens and families are put at the centre of government.

“I hope that we can deliver such a government because I am very clear that the people who came out and voted for Sein Fein voted for Sinn Fein to be in government.”

“It is clear that no political party in our country has a monopoly on representing the people of Ireland,” he said.

Sinn Fein has been left to rue its decision to run half the number of candidates of its two main rivals.

That has seen a significant number of Sinn Fein surplus votes being transferred to other parties in the proportional representation contest.

The could ultimately benefit Sinn Fein in the final shakedown, if its surpluses boost the numbers of potential left wing partners in government.

On Sunday, Mr Martin declined to repeat his pre-election pledge never to do business with Sinn Fein.

There are 160 seats in the Dail parliament.

The speaker is automatically re-elected, leaving 159 seats up for grabs and 80 the magic number for a majority.