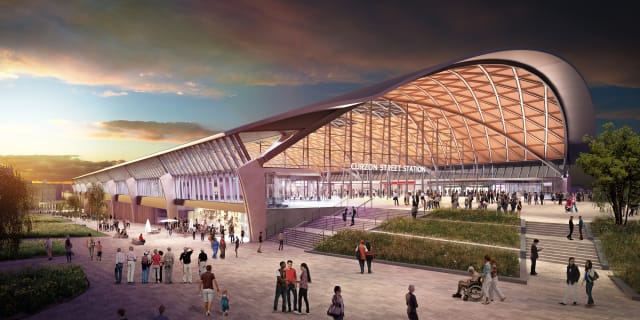 Boris Johnson is expected to give his backing to HS2 on Tuesday.

Here are 11 key questions about the controversial high-speed rail project.

– What about the schedule?

The first phase between London and Birmingham was due to open in 2026, but HS2 Ltd chairman Allan Cook said last year it would be “more prudent” to open between 2028 and 2031.

HS2 Ltd has spent around £8 billion.

The money has gone towards the purchase of land and property, ground investigation work, technical designs, IT systems, wages and public engagement.

– What has gone wrong?

Whitehall spending watchdog the National Audit Office found that the project is over budget and behind schedule because its complexity and risks were under-estimated by the Department for Transport and HS2 Ltd.

– Why is it so expensive?

There are several reasons why HS2 is costing so much.

The railway will sit on concrete slab track, which is more robust than traditional ballast but comes at a higher cost.

Putting the line below ground into tunnels and cuttings at several locations reduces the impact on surrounding areas but is more expensive.

Buying property on the route is also incredibly costly.

– What are the benefits of HS2?

One of the main benefits of HS2 will be the increase in capacity it will provide to Britain’s railways.

HS2 Ltd says the high-speed trains will carry more than 300,000 passengers a day, but they will also create space for more services on existing routes such as the West Coast Main Line.

HS2 trains will operate at up to 225mph, reducing journey times.

Political leaders in northern England and business groups claim the railway is vital to boost transport links across the region, providing increased capacity on an overcrowded network.

– Who are its opponents?

Communities living on or near the route, particularly in the Chilterns, are angry at the impact the railway will have on their lives.

Other critics say the project is too expensive, and the money should be used to boost existing transport networks.