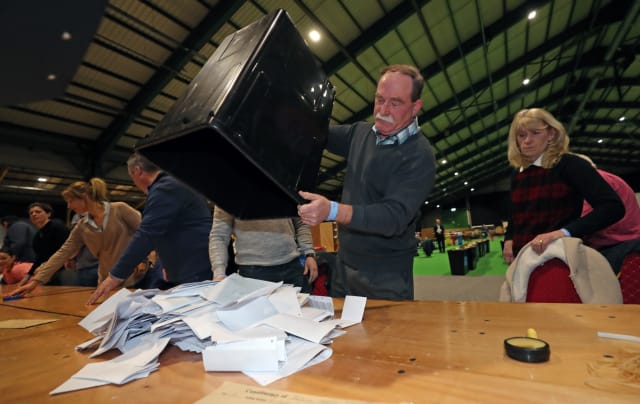 The unprecedented Irish General Election result has thrown up many questions.

Here are the answers to some of the most pressing.

– Sinn Fein is the most popular party but won’t win the most seats. How does that work?

Sinn Fein has been left to rue not fielding enough candidates to capitalise on its surge in support.

It ran only 42 – compared to Fianna Fail’s 84 and Fine Gael’s 82 – in the proportional representation contest. So the party is set to lose out on around 10 additional seats – gains that would have made it the biggest party in terms of Dail representation.

– Why did it not run enough? Was the party not expecting to do so well?

Hindsight is a wonderful thing but the decision on candidate numbers needs to be viewed in the context of the party’s poor performance in the last three elections in the Irish Republic.

Disappointing showings in presidential, European and local council polls did not suggest Sinn Fein was on the cusp of the historic breakthrough it achieved in the 2020 ballot.

In a PR contest, to run too many candidates comes with serious risks. It can result in votes being spread too thinly among party candidates in a particular race, meaning the loss of seats that could otherwise have been won.

– So who will be in the next government?

The million euro question. The historic election result has turned the old two-party system on its head.

All three of the main parties will fall way short of the 80 seats required to form a government in their own right, so some sort of coalition is inevitable.

Sinn Fein has expressed a desire to form a left-leaning administration by teaming up with smaller parties such as the Greens, Labour and Social Democrats, and willing independent TDs.

However, it might still not have the numbers to reach 80. That has raised the prospect of a Fianna Fail/Sinn Fein link-up, potentially with one of the other smaller parties.

A Fianna Fail and Fine Gael coalition looks unlikely, as it would be viewed as a partnership running contrary to the clear mood for change in the country. The odds of another confidence and supply deal involving the two historic rivals are also low, as both parties acknowledge the arrangement did little for their popularity in the last government.

– Why are Fianna Fail and Fine Gael so opposed to doing business with Sinn Fein?

Sinn Fein’s historic links with the Provisional IRA have always made it an unpalatable partner for the two long-time big beasts of Irish politics.

But two decades on from the Good Friday Agreement, this stance appears to be running out of road, with more and more voters clearly unimpressed with what Sinn Fein has branded an exclusionary and undemocratic position.

Efforts by Fianna Fail and Fine Gael to emphasis Sinn Fein’s response to past crimes of the Republican movement during the campaign failed to dint its vote. Many young voters were not even born during the conflict and are clearly more concerned with present-day issues than rows over the past.

– Was Brexit a big issue?

Unfortunately for Fine Gael, no. Leo Varadkar centred his re-election pitch on the party’s efforts to avoid a hard border in Ireland.

But while his performance on the international stage may have impressed fellow EU leaders, it did not resonate with voters back in Ireland who were more concerned with domestic problems in health and housing.

The election exit poll recorded that only 1% of voters believed Brexit was the key issue in the election.

– So what were voters concerned about?

Housing and health were the two standout issues for the electorate.

Ireland is currently experiencing the worst housing crisis in the history of the state, with the national conversation dominated by issues of homelessness, spiralling rent prices, lack of affordable housing and young people living with their parents or in emergency accommodation.

In health, record-breaking trolley numbers as well as strikes by nurses and paramedic staff have dominated headlines in the last year, as well as a huge spending overrun in the long-awaited, still unopened National Children’s Hospital.

The exit poll showed that 32% people said health and 26% said housing/homelessness were the most important deciding factor in how they voted.

– So what about Irish unity? Does the election make a border poll more likely?

Sinn Fein clearly is committed to securing a referendum as soon as possible but it would be wrong to interpret the result as evidence that the electorate in Ireland is similarly eager.

The party’s gains were very much down to its stance on key domestic and social issues and its success in presenting itself as an alternative to the old establishment.

The exit poll did suggest a majority of voters in the Republic favoured a poll in the next five years (57%) but the topic is a long way from dominating public discourse.

Any government that includes Sinn Fein would undoubtedly take a more proactive approach to the issue, and the party has insisted that planning for unification must start immediately.

The fact remains that the responsibility for calling a poll rests with the UK Government and its position is unlikely to change as a consequence of a different government taking charge in Dublin.