The Government has continued to defend plans to deport 50 people to Jamaica in the face of mounting legal challenges and widespread calls for the jet to be grounded.

Ministers insisted the flight, which is understood to be leaving the UK at 6.30am on Tuesday, would go ahead despite concerns people who came to the country as young children will be on board.

The decision follows news of a leaked report commissioned by ministers in the wake of the Windrush scandal which warned the Government that the policy should be reconsidered in all but the "most severe cases".

Lawyers have launched urgent legal proceedings in light of the report's recommendations after campaigners claimed those on board may have been denied access to proper legal advice.

Some of those due to be on the flight had bids to block their deportations refused by the High Court on paper, without a hearing taking place, by the time the court closed for business on Monday.

But a spokeswoman for the judiciary confirmed other cases were still being considered, while lawyers representing those whose cases were rejected said they would press for an urgent reconsideration at an out-of-hours telephone hearing on Monday evening. 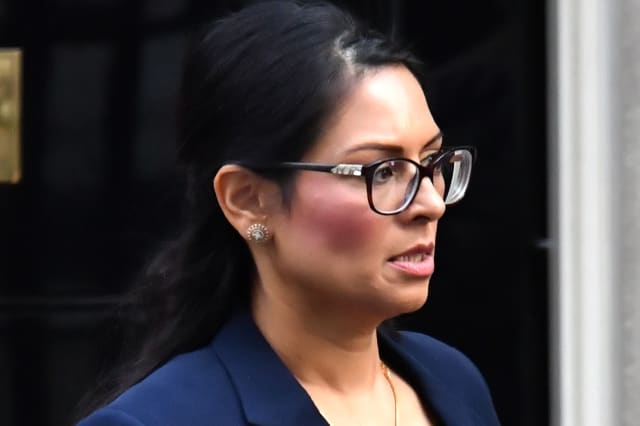 Meanwhile, a protest is due to congregate outside Downing Street.

The Government faced sustained questioning and some heavy criticism over the decision in the House of Commons on Monday afternoon.

Labour MPs shouted "shame" as Home Secretary Priti Patel left the chamber to allow junior minister Kevin Foster to respond to an urgent question on the matter for the Government.

He insisted no British nationals were on the flight and said deportation rules were applied on "the criminality, not the nationality of the offender" adding: "The foreign nationals on that flight have been sentenced to a total of 300 years in prison.

"The offences are, as we said, relate to everything from sex offending, serious drug trafficking offences, violent offences, firearms offences."

Mr Foster was repeatedly asked by MPs for more specific information on the nature of offences committed by those on the flight but refused to provide more detail.

The Home Office said murderers and rapists were among those on board but would not confirm how many, saying it could not provide such information because the flight was a live operation.

Shadow home secretary Diane Abbott told the Commons: "We need to be absolutely certain when we are deporting people in this way that we are clear about their immigration status."

While SNP immigration spokesman Stuart McDonald suggested the Government's action could leave 41 British children without a father in the country.

Duncan Lewis Solicitors filed papers calling for a judicial review earlier in the day on behalf of at least 15 people due to be on board the flight.

Meanwhile lawyers on behalf of charity Detention Action are seeking an urgent court injunction to halt the plans, claiming some on board have been denied access to legal advice.

More than 150 MPs have signed a letter calling on the Prime Minister to step in and stop the flight.

Toufique Hossain, director of public law at Duncan Lewis which is leading the legal challenge, told the PA news agency many of the clients had come to the UK as young children aged between four and 13.

A number of the people due on the flight are thought to have been convicted of one-time drug offences when they were young and have lived in the UK "for most of their lives".

The legal challenge calls for the flight to be halted over concerns that detainees are struggling to access legal advice and over the claims made over the criminality of those due to be on board.

The action has been launched in light of the recommendations in the leaked Windrush Lessons Learned review that deportations of people who have been here since childhood should be stopped and reconsidered.

Written in June 2019, the document seen by PA said: "Government should review its policy and approach to FNOs (foreign national offenders), if necessary through primary legislation.

"It should consider ending all deportations of FNOs where they arrived in the UK as children (say before age of 13). Alternatively – deportation should only be considered in the most severe cases."