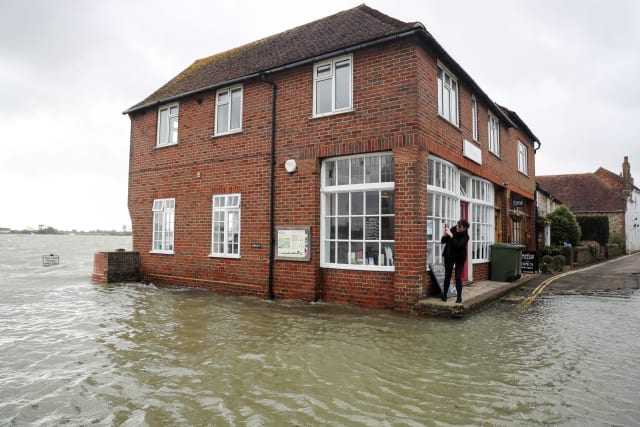 The Government has activated an emergency financial aid package for areas devastated by Storm Ciara, after a motorist was killed by a falling tree and forecasters warned of “hazardous” weather ahead.

This could be for items including rest centres, temporary accommodation and staff overtime.

Storm Ciara swept across the country on Sunday and left thousands without power, while homes were evacuated, buildings were damaged and sporting fixtures postponed.

It brought 97mph gusts to the Needles in the Isle of Wight and rainfall levels of 178mm were recorded at Honister Pass in Cumbria.

The Bellwin announcement comes after Hampshire Police said a motorist was killed as he drove his Mercedes on the A33 from Winchester to Micheldever and a tree toppled on to his car just before 4pm on Sunday.

The driver, a 58-year-old man, of Micheldever, was pronounced dead at the scene.

Hampshire Police said: “His next of kin have been informed and are being supported by specialist officers.”

Flights, ferries and trains all faced disruption as the UK struggled to recover from Sunday’s storm.

Heavy snow has started to fall in some regions and forecasters are warning of the possibility of lightning in the heaviest snow showers.

Met Office meteorologist Bonnie Diamond said: “Storm Ciara has cleared but it is still windy. There is the risk of snow and ice depending on where you are. There is very much hazardous weather still around.”

The Met Office also said that “a spell of very strong winds,” with gusts of 60-70mph, is expected across southern England on Monday, bringing likely delays to road, rail, air and ferry transport.

There is a yellow warning for wind in the South on Monday.

A yellow warning for heavy snow and strong winds is in place for Northern Ireland and most of Scotland, while a yellow warning of snow and ice is in force for north-west England through to Tuesday.

There is also a yellow snow and ice warning covering these regions on Wednesday, as snow showers and icy stretches could cause further disruption.

Forecasters said some areas could see blizzards with up to 20cm of snow.

There were also 73 flood warnings in place across the country on Monday as of 3.35pm.

More than 20,000 homes were left without power overnight as Storm Ciara whipped across the country.

Western Power Distribution – which covers the Midlands, the South West and South Wales – said around 4,000 homes were without power by Monday at 4pm.

Heavy downpours and wind saw a huge sinkhole open up in a garden in Belfield, Rochdale. Amanda Webster spotted turf falling down into a big sinkhole which had flowing water at the bottom.

A motorist had a lucky escape when their Toyota car went into a sinkhole in Hatch Road, in Pilgrims Hatch, Brentwood, Essex, where six properties had to be evacuated due to the unstable ground.

A partially collapsed sewer had been reported to Essex Country Fire and Rescue Service in the early hours. The emergency services made the scene safe just before 4am.

Parts of the West Yorkshire communities of Mytholmroyd and Hebden Bridge, which was devastated by flooding four years ago, were also deluged.

River levels peaked on Sunday just below the record levels of the 2015 Boxing Day floods which caused millions of pounds of damage to houses and businesses right along the Calder Valley.

More than £30 million has been spent on flood defences in Mytholmroyd since the 2015 deluge.

Early reports from the village were that some of the new defences held but many homes were still inundated.

The main bridge at Elland was also closed for structural assessments after a large shipping container hit it and lodged underneath.

Martin Slater of the Environment Agency told BBC Radio Leeds: “As the rain that fell yesterday moves down the River Aire catchment and the River Calder it will be going through Leeds overnight and today.”

Mr Slater added: “The catchments are really saturated and there’s not places for any future rain to go, so we do ask people to be really careful.

“Some of our measuring devices recorded around about 100mm rain in a 12 to 18-hour period so that’s a lot of rain falling in a very short period of time.”

Network Rail said that thousands of engineers had “battled horrendous conditions” throughout Sunday and overnight into Monday in a bid to clear tracks and repair damage after strong winds blew tress, sheds, roofs and trampolines and other debris on to the railway. Overhead power lines were also brought down.

The West Coast Main Line was suspended between Carlisle and Glasgow due to flooding at Caldew Viaduct, Cumbria.

Speed restrictions were put in place on several routes, meaning journeys took longer than normal and frequencies were reduced.

Airlines operating to and from UK airports were also affected by the weather conditions, with more than 100 flights cancelled.

British Airways and easyJet appeared to be the worst affected, although several other airlines also cancelled flights.