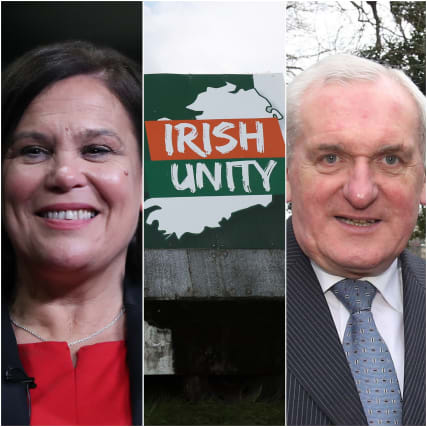 Mary Lou McDonald’s first General Election as leader of the republican party on Saturday, saw the party romp home with huge gains across the state, and in constituencies where they had historically never had a representative.

Due to the historic shift, focus has now turned to the question of a united Ireland, a long held aim of Sinn Fein, and the basis for their “programme for government”.

Bertie Ahern, the former taoiseach and Fianna Fail leader said on Monday, as counting continued across the state: “I think a border poll is inevitable.

“If you ask me when that is, I think it’s probably five years off at least.

“I think the Sinn Fein position is it should be held within five years.

“So let’s say we are talking about it being five years off, I do not think you are going to get the circumstances where it would become a condition of government that it has to be held in the short term.

“But it will be inevitable over this decade.”

On BBC Radio 4’s World At One he warned against rushing towards a poll on reunification before extensive preparatory work had been completed.

“It can only be done when the preparation is done, when the case is made, when it has been well explained, when people know the outcome,” he said.

“To try and push it or rush it, which some people will probably try to do, would be a grave mistake.”

Sinn Fein has gained the most first preference votes in Ireland’s 2020 election held on Saturday, however a united Ireland and Brexit did not feature as major voting issues.

Domestic crises in the health and housing sector are widely accepted as the two main drivers behind the shift in Irish politics.

“We have provided solutions in terms of the health crisis and the housing crisis so we will want to work with others to establish a programme for government that reflects how we can deliver upon those promises,” she said.

“At the end of the day, we have said there should be a unity referendum within five years so that’s the position we will take into negotiations.”

“We have said things are going in this direction for some time, I think for a number of reasons not least the fact that the unionist majority, the very basis on which this northern state was founded, is gone and has been gone over the last number of elections.

The Sinn Fein leader set about trying to form a left-coalition government on Monday, contacting smaller progressive parties and independents, however even if all were on board, she is likely to still fall shy of the 80 seats needed to form a government and could be forced to look to one of the traditional parties, Fine Gael or Fianna Fail, for assistance.

Fianna Fail, likely to hold the most seats in the Irish parliament after the votes have been counted, has sent mixed messages over whether or not it would be willing to work with Sinn Fein, with some representatives saying the coalition is “inevitable” while others say the two party’s policies are “untenable” together.