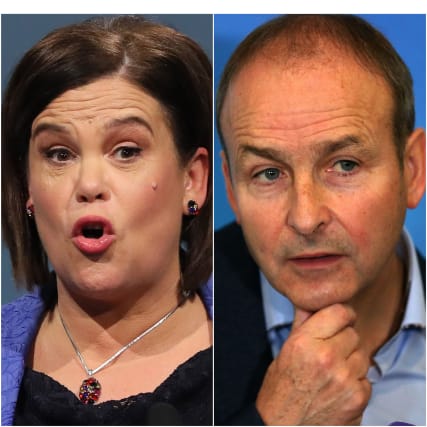 Fianna Fail has been confirmed as the largest party in Ireland’s next parliament by the narrowest margin over a surging Sinn Fein.

Micheal Martin’s party finished with 38 seats to Sinn Fein’s 37 at the end of two days of counting.

But given the Fianna Fail speaker was re-elected without contest, both parties essentially ‘won’ the same number of seats.

Taoiseach Leo Varadkar’s Fine Gael was the big loser, recording one of the worst results in its history, winning only 35 seats having entered the campaign as the largest party on 47.

Despite being edged in seat numbers, Sinn Fein is undoubtedly the party with most to celebrate, having smashed Ireland’s long-standing two party system.

Mary Lou McDonald’s party triumphed in the popular vote and may have won many more seats – potentially an additional 11 – if it had fielded more candidates in the landmark contest.

Hours before counting finished, Ms McDonald predicted she could be poised to become Ireland’s next leader.

On an impromptu walkabout in Dublin city centre, she said: “I may well be the next taoiseach, yes.”

She later told the media: “I think it would be a mighty thing to have a Sinn Fein taoiseach and also a woman perhaps in the job but you might say ‘she would say that wouldn’t she?’”

All three major parties are far short of the 80 seats required for a Dail majority so, barring another election, some form of coalition is inevitable.

The task of forming a government could be a long and tortuous one and may force either Fianna Fail or Fine Gael to back-track on long-standing pledges never to do business with Sinn Fein.

Smaller parties and groupings such as the Greens, Labour, the Social Democrats and Solidarity/People Before Profit, and a sizeable number of independent TDs, may all be courted as the main parties seek junior coalition partners.

Ms McDonald’s preference is for a coalition of left-wing parties and independents, without any input from the centre right Fianna Fail and Fine Gael.

However, it remains doubtful whether such an alliance could generate sufficient numbers for a majority.

A coalition of Fianna Fail, Sinn Fein and the Green Party, which ended with 12 seats, is seen by many as the most likely option.

But on Monday a senior Fianna Fail politician described a coalition with Sinn Fein as “untenable”.

Jim O’Callaghan also insisted his party leader Mr Martin had not softened his stance on ruling out the party as government partners.

Mr O’Callaghan’s views are not echoed by all his colleagues, with some Fianna Fail members having indicated a willingness to do business with the Sinn Fein.

Another permutation could see the exclusion of Sinn Fein, with Fine Gael and Fianna Fail entering power together in a so-called “grand coalition” with another smaller party or grouping – though that prospect looks increasingly unlikely.

Ms McDonald has pledged to work to form a “people’s government” and get to grips with crises in housing and health – the issues that featured so prominently on the campaign trail.

“This election has certainly been seismic and historic, it’s been an election that’s really been driven by a demand for change by the people,” she said.

“It is clear that no political party in our country has a monopoly on representing the people of Ireland,” he said.

On Sunday, Mr Martin declined to repeat his pre-election pledge never to do business with Sinn Fein.

That pact between two parties founded from opposing sides of Ireland’s civil war of the 1920s took 70 days to negotiate following the inconclusive 2016 general election.

It looks unlikely that either party will countenance a similar arrangement this time round.