Coastguard braves stormy seas to save surfer off Hastings coast 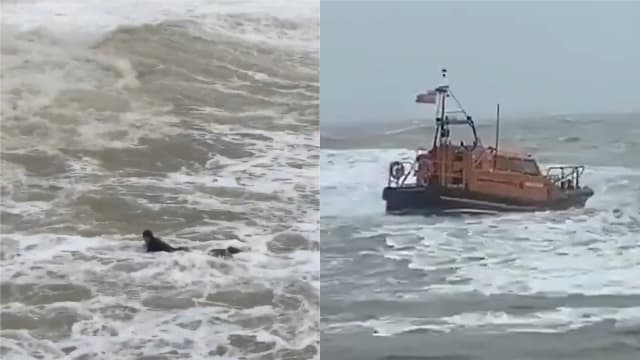 Coastguard rescue services braved the choppy waters after a surfer was washed out to sea during Storm Ciara on Sunday.

Footage on social media showed a lifeboat close to capsizing as it went in search of the surfer, who later washed ashore near to Rock-A-Nore in Hastings.

David Silsby, who witnessed the events, said the “atrocious” conditions forced him to stay in his car.

“I drove down to the seafront with the intention of looking at the sea from a safe distance,” he told the PA news agency.

“On arriving at Rock-A-Nore, the car park was closed off and emergency vehicles were in attendance. I saw the lifeboat moving from the Rock-A-Nore direction towards the old harbour arm.

“From the way it was moving, I assumed they were doing some kind of search pattern – the weather was atrocious.”

Mr Silsby began to film the rescue operation just before the boat was hit by a large wave which threatened to overturn it.

“I was genuinely shocked and worried that they might completely capsize. I am incredibly grateful for these brave people who put their lives on the line,” he said.

“I’m so glad they made it safely to a harbour in Eastbourne and that the surfer they went to rescue was safe too.”

He added that the surfer was washed several miles along the coast to Pett where he came ashore himself.