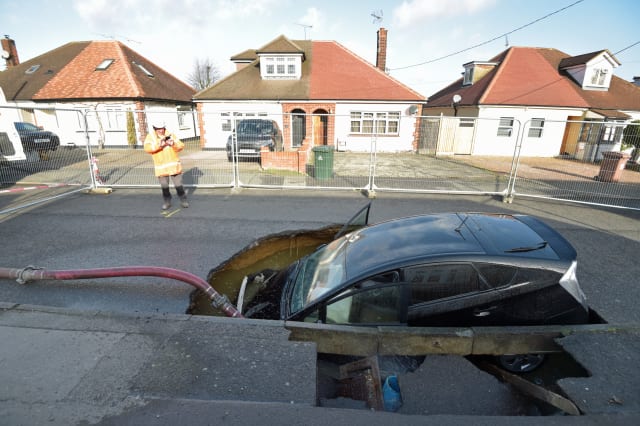 Homes have been evacuated in Essex after a car fell into a huge sinkhole following wild weather caused by Storm Ciara.

Pictures from the scene showed the Toyota trapped nose-first in the sinkhole on a residential road in Brentwood, with the driver and passenger doors wide open and both airbags inflated.

Firefighters were called to Hatch Road, in the Pilgrims Hatch area, shortly after 1.30am on Monday following reports that a sewer had partially collapsed.

Essex County Fire and Rescue Service said crews reported that the hole had extended into the road and a car was trapped.

Six properties were evacuated in the early hours of the morning due to unstable ground.

The fire service said they worked to make the scene safe by 3.53am, before handing the scene over to Anglian Water.

An Anglian Water spokesman said: "We are currently on site on Hatch Road, Pilgrims Hatch, in Brentwood investigating a sink hole which has opened up in the road.

"We are working with other utilities (water and gas) plus the local police to assess if any of our pipes have been damaged."

The process of removing the vehicle from the hole began shortly before midday on Monday.

Storm Ciara brought a month and a half's rainfall in just 24 hours as gusts of more than 90 miles per hour swept across the country on Sunday.

Thousands of people were left without power, some homes were evacuated, buildings were damaged and sporting fixtures postponed.