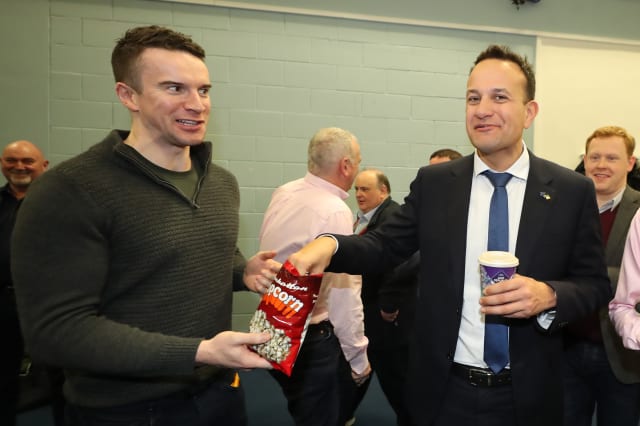 While the sounds of Sinn Fein’s Paul Donnelly win rang out and supporters sang the Irish song “O Ro, se do bhath abhaile” which translates as “welcome home”, Fine Gael party hacks and supporters could only look on enviously.

Fine Gael leader and Taoiseach Leo Varadkar has experienced defeat and victory throughout his political career but even he could not have predicted the scale of Sinn Fein’s victory on his home turf.

In his absence on Sunday morning, Mr Varadkar’s partner Matt Barrett and his sister Sonia kept an eye on the tally as it because clear Mr Donnelly was hoovering up votes.

His parents Miriam and Ashok arrived in the afternoon and posed for the photographers and waiting camera crew, old hands at this stage while Miriam had to pull a sheepish Mr Barrett into the photo.

When news reached that he was on his way into the count centre, a crowd of supporters emerged and tried to raise spirits by shouting “Leo, Leo, Leo” while his ashen-faced advisers trailed behind him.

He failed to reach the quota on the second count but remained sanguine.

After the fourth count he failed to reach the quota by 20 votes.

“You’re pizza will have gone cold by the time this is over,” he joked to reporters while he and Mr Barrett shared a bag of popcorn.

Finally, on the fifth count he was elected for the fourth time as a TD for Dublin West and embraced his family and supporters.

Holding up four fingers, he said: “Another term of it.”