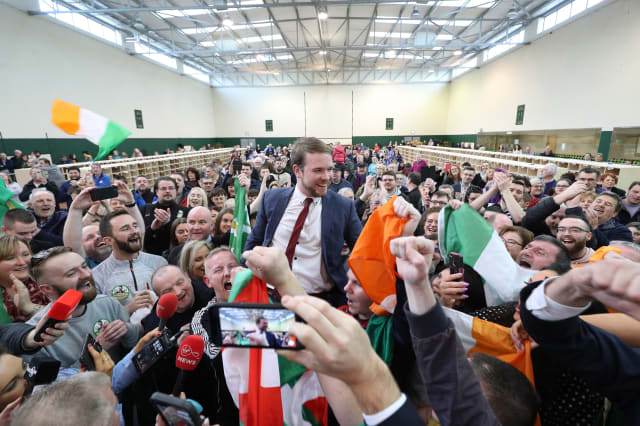 Sinn Fein’s Donnchadh O Laoghaire became the first elected TD in Ireland after outpolling both the Fianna Fail leader and the Tanaiste.

Mr O Laoghaire, 31, stood with his wife Eimear and their two young children during the declaration as it was confirmed he had topped the Cork South Central poll with 14,057 votes.

He was the only TD elected in the constituency on the first count, leaving Micheal Martin and Simon Coveney a longer wait to find out if they had been returned for the 33rd Dail (Irish Parliament).

Mr Martin finished second after the first stage of the count with 11,023 votes, followed by Mr Coveney with 9,327 votes and Fianna Fail’s Michael McGrath with 9,236 votes.

The couple celebrated with a kiss before he was hoisted aloft by cheering supporters.

“I’m delighted, absolutely delighted, it’s a huge mandate that we’ve got,” he said.

“We haven’t expect this kind of vote but when you see this is replicated across the state there is an enormous appetite for change.”

Earlier the Sinn Fein man admitted that early tallies which suggested he would top the poll had surprised him, adding he had been expecting to have to battle for the fourth and final seat.

“It’s a very competitive constituency, there are some very very big political names in it, and I think it is a significant statement in Cork obviously but across the board that we have managed to register this kind of vote in a constituency that has the Tanaiste, the leader of Fianna Fail and the Fianna Fail finance spokesperson,” he said.

“I want to first of all thank the voters of Cork South Central because it seems from the tallies that we will win two seats here, in or around 35% of the vote, which given everything which has happened today is a very, very solid performance from myself and Michael McGrath,” he said.

“We will obviously listen.

“The people have spoken and there is no greater democrat than I, but that said we will not pre-empt the outcome itself because it’s very clear to us that the destination of the final seats in many constituencies cannot be called now.”