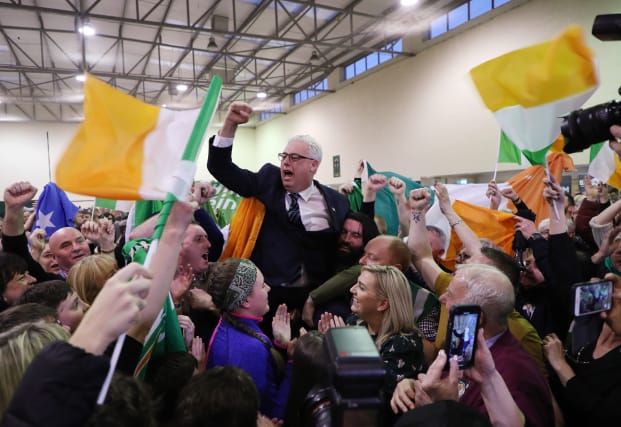 Fianna Fail’s leader has failed to rule out entering government with Sinn Fein after a General Election set to transform the political landscape in Ireland.

While Micheal Martin stopped short of repeating his pre-election pledge never to do business with Sinn Fein, Taoiseach and Fine Gael leader Leo Varadkar did re-state his determination not to partner up with Mary Lou McDonald’s party.

Mrs McDonald said she was willing to talk to all political leaders but expressed a desire to lead a coalition made up of left-leaning parties, without any input from Fianna Fail or Fine Gael, which are both centre-right in outlook.

While it remains unclear whether it will ultimately be part of any future coalition, Sinn Fein’s performance has undoubtedly sent shockwaves through Ireland’s political establishment.

The final declaration of seats remains a long way off, but the first wave of declarations suggest it is set to shatter Ireland’s long-established two-party system.

Despite topping the polls across the country when first preferences were added up, Sinn Fein is still unlikely to emerge with the most seats.

Arriving at his count centre in Cork, Mr Martin would not rule out working with Sinn Fein or Fine Gael, having definitively refused to countenance either as coalition partners during the campaign.

The Fianna Fail leader, who said his party looked like being on course to win the most seats, was repeatedly pressed to restate his opposition to a potential Sinn Fein partnership.

While insisting there were “significant incompatibility” issues in terms of policy, he did not dismiss the suggestion outright.

“Our policies, our positions and principles haven’t changed overnight or in 24 hours,” he said.

In a result symbolic of the Sinn Fein surge, the first seat declared in the election was the party’s Donnchadh O Laoghaire, who topped the poll in Cork South Central ahead of Mr Martin.

Mr Varadkar was also outpolled by a Sinn Fein candidate in Dublin West.

Mr Martin said: “We will obviously listen. The people have spoken and there is no greater democrat than I, but that said we will not pre-empt the outcome itself because it’s very clear to us that the destination of the final seats in many constituencies cannot be called now.”

Mr Varadkar struck a different tone as he waited for confirmation of his re-election.

He said he would not be speaking to Mrs McDonald with a view to forming a coalition, insisting Fine Gael was “not compatible with Sinn Fein”.

“We are willing to talk to other parties about how we could form a government and give this country a government that can spend the next five years dealing with the problems that we have had to tackle for the past few years,” he said.

If parties do ultimately stick to their pre-election pledges then it would be extremely difficult for any of the three to lead a majority government.

Smaller parties such as the Greens, Labour, the Social Democrats and Solidarity/People Before Profit – and a sizeable number of independent TDs – may all be courted as the main parties seek junior coalition partners.

Arriving at the RDS count centre in Dublin, Mrs McDonald branded talk of excluding her party as “undemocratic”.

She said she had been in touch with the Greens, Social Democrats and People Before Profit to discuss the prospect of them joining her party in government.

“It’s been an election about change,” she said.

“The extraordinary thing is that it seems that the political establishment – and by that I mean Fianna Fail and Fine Gael – are in a state of denial. They are still not listening to what the people have said.

“I also have to say this, that in any event I do not accept the exclusion – or talk of excluding our party – a party that represents almost a quarter of the electorate.

“I think that is fundamentally undemocratic.”

Asked if the result marked a revolution in Irish politics, Mrs McDonald replied: “Yes, you could call it that for sure.”

The uncertainty created by the exit poll has even thrown up the possibility of another General Election being necessary.

There are 160 seats in the Dail parliament. The speaker is automatically re-elected, leaving 159 seats up for grabs and 80 the magic number for a majority.

Vote transfers will be crucial in the proportional representation contest.

A new confidence and supply deal cannot be ruled out – potentially a reverse of the last one, with Fine Gael supporting a Fianna Fail-led minority.

The fractured vote could even force Ireland’s two traditional political superpowers to contemplate the once unthinkable – a grand coalition in government together.

Brexit did not feature prominently in an election campaign which was instead dominated by domestic issues like spiralling rental prices, record-breaking homeless numbers, controversy over the state pension age and a struggling health service.

The exit poll, carried out by Ipsos MRBI on behalf of The Irish Times, RTE, TG4 and UCD, suggested that only 1% of voters highlighted Brexit as their main concern.

Health (32%) and housing or homelessness (26%) were the most important deciding factors in how people voted.

Counting, which is taking place across the state’s 39 constituencies, is expected to last at least two days.

There is a mix of three, four and five-seat constituencies.