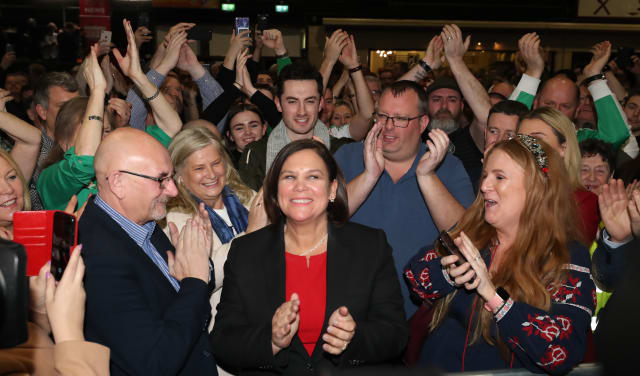 A huge media scrum was poised at the main entrance to the Simmonscourt complex ahead of the arrival of Mary Lou McDonald.

They had been waiting at the Royal Dublin Society building in the capital for almost two hours when the Sinn Fein president was whisked in on a wave of cheering and clapping from her supporters shortly after 3.30pm.

Mrs McDonald, who marks two years as Sinn Fein president on Monday, was asked if the result marked a revolution in Irish politics.

She replied: “Yes, you could call it that for sure.”

The swarm of journalists, photographers and party supporters followed her every move as she made her way throughout the count centre.

The Rathgar-born woman has created huge political waves since she first won a seat in the Dublin Central constituency in 2011.

After polling just 8.02% of first-preference votes when she first contested a general election in 2002 and failing to win the seat, Mrs McDonald has top the poll in 2020 with 11,223 votes.

Sinn Fein supporters erupted into cheers as she was elected as the first TD in the Dublin Central constituency.

The surprise of her success was palpable as she embraced ardent Sinn Fein voters and took selfies with young supporters.

She denied suggestions the surge in people backing her party was down to protest votes.

“This is certainly an election that is historic in proportions. This is changing the shape and mould of Irish politics,” she added.

“This is not a transient thing – this is just the beginning.”

Minutes after she was elected back into the Dail, Mrs McDonald had made her way out of the RDS to visit other Dublin count centres to continue the celebration of Sinn Fein’s success story.