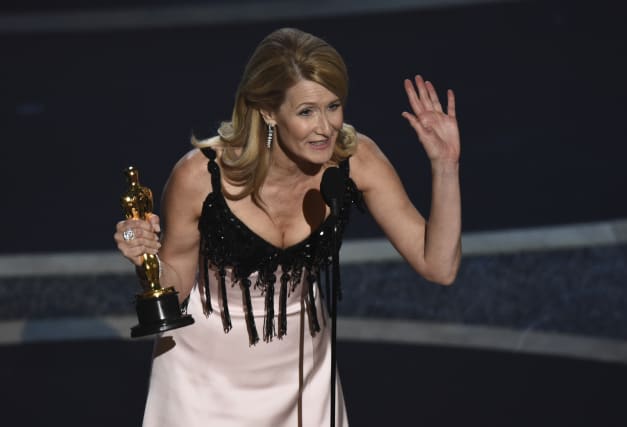 Laura Dern got an early birthday present as she won the best supporting actress Oscar.

Her mother, the actress Diane Ladd, wiped away tears as she collected the trophy for playing a divorce lawyer in Marriage Story.

Dern paid tribute to her famous parents, saying: “Some say never meet your heroes but I say, if you’re really blessed, you get them as your parents.

“I share this with my acting legends, Diane Ladd and Bruce Dern. You got game, I love you.”

Dern added: “Thank you all for this gift, this is the best birthday present ever. I love you.”

She will turn 53 at midnight in Los Angeles.

Brad Pitt won the best supporting actor Oscar for his turn as stuntman Cliff Booth in Once Upon A Time… In Hollywood earlier in the ceremony and took a swipe at the Senate and thanked his children.

He previously won a best picture Oscar as the producer of 12 Years A Slave but this is his first acting prize.

As he was handed his prize by Regina King, he criticised Senate Republicans for refusing to allow former national security adviser John Bolton to testify in US President Donald Trump’s impeachment trial.

Pitt said: “They tell me I have only got 45 seconds, that is 45 seconds more than the Senate gave John Bolton this week.

“I’m thinking maybe Quentin does a movie about it and in the end the adults do the right thing.”

He added: “This is incredible, really incredible. Thank you for this honour of honours.

“This is really about Quentin Tarantino, you are original, you are one of a kind, the film industry would be a much drier place without you.”

Paying tribute to his co-star Leonard DiCaprio, he said: “Leo, I’ll ride on your coattails any day man, the view’s fantastic.

“This is for my kids, who colour everything I do.

“Once Upon A Time In Hollywood, ain’t that the truth?”

The ceremony was opened by Janelle Monae, who appeared on the set of US children’s TV show Mister Rogers’ Neighbourhood to perform the theme song, which appears in the film A Beautiful Day In The Neighbourhood.

She then moved into a song about the Oscars, where she was joined by Billy Porter, who performed Sir Elton John’s I’m Still Standing.

Appearing to refer to the lack of women nominated in the directing category, she said: “We are celebrating all the women who directed phenomenal films.

“I’m proud to be here as a black queer woman.”

The performance was greeted by a standing ovation.