I will not form Government with Sinn Fein, says Varadkar 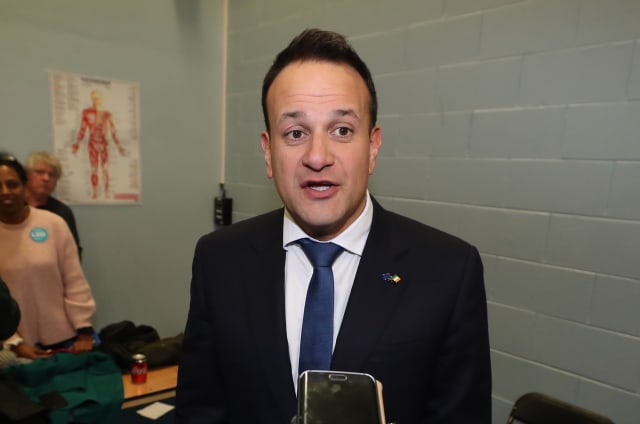 Leo Varadkar has ruled out forming a Government with Sinn Fein and said it could be months before an administration is formed.

He said his Fine Gael party differed dramatically on issues like criminal justice and how to run the economy.

Mr Varadkar trailed a Sinn Fein candidate who topped the poll in his constituency in West Dublin.

The Irish premier said his vote had increased on previous elections and he had been elected four times in a row.

He predicted Fine Gael, Fianna Fail and Sinn Fein would finish with roughly 40 seats each and the business of constructing an administration would be difficult.

Mr Varadkar said: “Nobody can be forced into some sort of forced marriage or forced coalition.”

He added: “In order to form a Government together you have to have roughly the same views around the courts, criminal justice system, around how the economy should be run and also how democracy should function and that is what makes my party Fine Gael not compatible with Sinn Fein.”

The Taoiseach said he had made his view on coalition clear during the election campaign.

“We won the votes that we won on that basis and my position has not changed,” he said.

“What I said and my party said during the campaign was not a tactic or a strategy.

“It was what we honestly believed and for us coalition with Sinn Fein is not an option but we are willing to talk to other parties about the possibility of forming a Government, one that can lead the country forward for the next five years.”

Mr Varadkar’s partner Matthew Barrett was among those to greet him as he arrived at the count centre in Dublin.

He said: “It is going to be a number of weeks or a number of months before we are in a position to form a Government.”