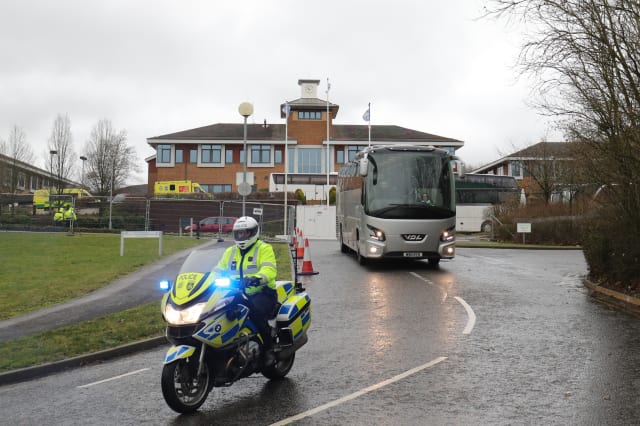 Another person has tested positive for coronavirus in England, bringing the total number of cases in the UK to four.

The latest patient diagnosed had come into contact with a previously confirmed UK case and is being treated at the Royal Free Hospital in London, chief medical officer for England Professor Chris Whitty said.

The new case comes after another plane carrying British citizens evacuated from the coronavirus-hit city of Wuhan landed in Oxfordshire.

The flight, with more than 200 people on board, including some foreign nationals, arrived at RAF Brize Norton shortly before 7.30am on Sunday.

As the death toll in China from the virus rose to 811, Prof Whitty said: "A further patient has tested positive for novel coronavirus in England, bringing the total number of cases in the UK to four.

"The new case is a known contact of a previously confirmed UK case, and the virus was passed on in France.

"Experts at Public Health England continue to work hard tracing patient contacts from the UK cases. They successfully identified this individual and ensured the appropriate support was provided.

"The patient has been transferred to a specialist NHS centre at The Royal Free Hospital, and we are now using robust infection control measures to prevent any possible further spread of the virus.

"The NHS is extremely well prepared to manage these cases and treat them, and we are working quickly to identify any further contacts the patient has had.

"This patient followed NHS advice by self-isolating rather than going to A&E. For the latest advice visit gov.uk/coronavirus."

The fourth UK case was confirmed not long after a British man in Majorca tested positive for coronavirus.

His wife and two daughters tested negative, the government in the Balearic Islands said.

The health ministry said the study of cases that may have had contact with the man had already begun.

The passengers on the charter flight have been taken to the Kents Hill Park hotel and conference centre in Milton Keynes, Buckinghamshire, where they will be quarantined for 14 days.

A total of 13 staff and medics were also on board.