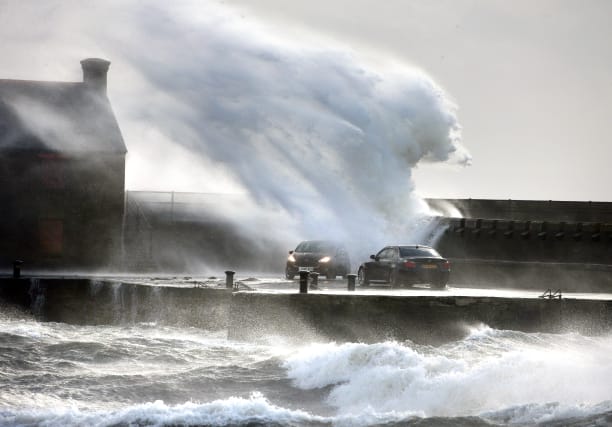 Authorities had warned the storm was likely to cause “significant disruption” after the Met Office issued yellow warnings of strong winds across Scotland on Sunday with gusts of up to 80mph possible in some areas.

In Hawick in the Borders a guest house and bistro collapsed into the River Teviot on Sunday, though no-one was injured.

A gust of 77mph was recorded in Tiree and 70mph in Lerwick, Shetland on Sunday, the Met Office said.

The strong gusts followed high winds on Saturday when three people were injured after part of a pub roof collapsed in Perth.

Emergency services were called to the scene at The Venue in St John Street, Perth at around 7.25pm on Saturday.

Ferry operator Caledonian MacBrayne suspended or cancelled many of its services on Sunday, as the west of the country bore the brunt of the bad weather.

Train operator ScotRail said it had suspended services between Kilwinning and Largs and Ardrossan “due to the severe weather conditions”.

Meanwhile Avanti West Coast, which runs rail services between London and Scotland, took the decision not to run trains north of Preston, as a result of the impact of Storm Ciara.

And the A78 road northbound between Largs and Skelmorlie in Ayrshire was also closed due to flooding.

The highest level of rainfall was recorded in Eskdalemuir in Dumfries and Galloway where 84mm of rain fell in the 24 hours up to 4pm on Sunday, the Met Office said.