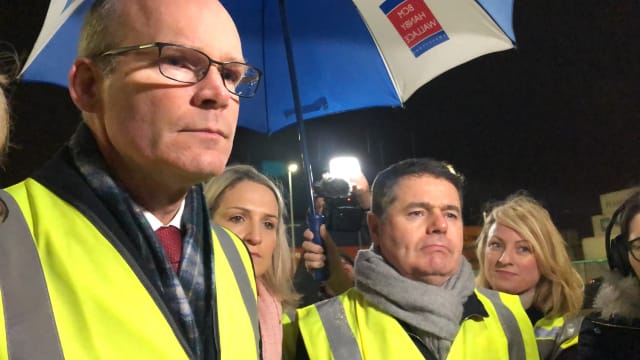 Fine Gael’s plan to make its handling of Brexit as a key part of its re-election strategy has backfired spectacularly for the party.

During the campaign, Fine Gael highlighted Taoiseach Leo Varadkar’s success in preventing a hard border on the island and keeping Northern Ireland free of checks after Brexit.

The strategy has fallen flat amid voter dissatisfaction over an ongoing homeless crisis, a creaking health service and a huge tranche of voters aged under 35 locked out of the housing market.

While Mr Varadkar and Foreign Affairs Minister Simon Coveney won international acclaim for their handling of Brexit, domestic voters have been less enamoured.

Kicking off its campaign in Monaghan, located in the border region, the party announced that Brexit is “only at half time” and how they were the party with the people to see it through.

Speaking at the time, Fine Gael director of elections Paschal Donohoe said Brexit was the “vital background to the election”, and Fine Gael had “the plans and the people to keep the country safe”.

Meanwhile, Deputy Irish Premier Simon Coveney said Ireland is at the halfway point of Brexit and that Fine Gael had the right team and warned against letting Fianna Fail’s “b-team” take the reins.

While the great and good of Fine Gael posed and smiled with heavy machinery at the Combilift factory in Co Monaghan, the optics could not have been worse.

Earlier that day, a homeless man was gravely injured by heavy lifting equipment involved in clearing tents in Dublin city.

While on a canvass in Co Cavan, situated in the heart of the region most likely to be affected by Brexit, Mr Varadkar found the finely honed message on Brexit falling flat.

Local people brought bread and butter issues such as healthcare, childcare, housing and a new bypass for the town.

While Mr Varadkar tried to turn the narrative back to Brexit and how a good trade deal need to be negotiated so voters demands could be paid for, his pleas fell on deaf ears.

Mr Varadkar continued his leader’ tour canvassing towns around the country yet voters who got his ear, discussed anything but Brexit with him.

Meanwhile, back at Fine Gael’s slick election headquarters in a restored Georgian House in Dublin, their ministers held press conferences where they tried to steer the media’s attention to Brexit to no avail.

The brutal murder of 17-year-old Keane Mulready-Woods put drugs and crime on the agenda with Mr Varadkar facing questions about whether or not he had taken illegal drugs.

During a TV debate, his excruciatingly long pause when asked about drug use, ridicule for Fine Gael’s social media strategy and a Fine Gael senator describing Mr Varadkar as “autistic” also kept Brexit off the agenda.

The party drew media ire for staging a 5am photocall at Dublin Port with their Brexit heavyweights Simon Coveney, Helen McEntee and MEP Mairead McGuinness on the day Britain left the European Union.

A handful of red-eyed journalists turned up to watch them pointing to lorries driving off a ferry.

While Mr Varadkar was forced to admit Brexit was not coming up on the doorsteps, the party maintained its bullish position right until the end of the campaign.

An exit poll published on Saturday as soon as voting was over found only 1% of people cited Brexit as a factor in how they will vote.

On Sunday morning, Business Minister Heather Humphreys told RTE radio it was not a mistake for Fine Gael to put Brexit at the centre of its re-election strategy.

Asked if she thought it was a mistake by party strategists, she said: “No, I don’t because as the end of the day we have told people the facts and we have told them the truth.

“We have had a difficult campaign because after nine years of government people want to see something different.”

Mr Varadkar failed to be elected on the first count in his own constituency on Sunday with Sinn Fein candidate and newcomer Paul Donnelly polling more than 12,000 votes.