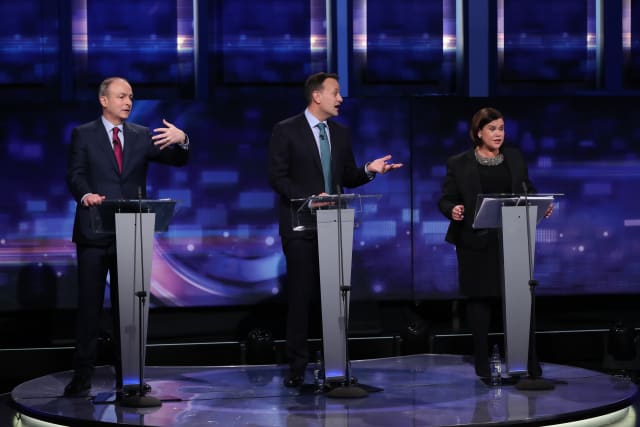 Sinn Fein is on course to make Ireland a country of three big parties, marking a dramatic change in the state’s political landscape.

Despite an exit poll suggesting almost a quarter of voters backed Sinn Fein in the General Election, both Fianna Fail and Fine Gael have consistently ruled out going into coalition with their rivals.

As the opinion polls signalled a strong surge in support for Mary Lou McDonald’s party, the dialogue around which parties could lead the next government quickly changed.

Micheal Martin and Leo Varadkar faced down questions about whether they would be open to working with Sinn Fein, with both leaders ruling out doing a deal with Ms McDonald.

Mr Varadkar said his party’s long-held differences with Sinn Fein prevents it from relying on their support in any coalition government.

During the election campaign, Mr Varadkar was challenged on his position on Sinn Fein, as he had long criticised the party for not restoring powersharing in Stormont sooner, and urged them back into government repeatedly in Northern Ireland.

Mr Varadkar however said that “the north is different”.

“Northern Ireland is a devolved government, it’s not a sovereign state, and in Northern Ireland the Good Friday Agreement provided for what is effectively an all-party coalition,” he said.

“I don’t think people comparing Stormont with a sovereign parliament like the Dail is an accurate comparison.”

He said the reason Fine Gael have ruled out working with Sinn Fein is a “point of principle”.

He raised concerns about Sinn Fein’s key policy decisions not being made by elected representatives but by their Ard Comhairle.

Mr Varadkar and Mr Martin also say they have a major problem with Sinn Fein’s stance on the Special Criminal Court which Sinn Fein has previously opposed but now say needs to be reformed.

Faced with the Sinn Fein surge, Fine Gael and Fianna Fail have continued to raise the party’s historic IRA links and, as the campaign entered its latter stages, the past crimes of the provisional movement.

But the Fianna Fail and Fine Gael leaders could face pressure to form a coalition government that involves Sinn Fein given the predicted close election result.

During the last week of the election campaign, a Sinn Fein minister in the Northern Ireland Executive was forced to apologise and withdraw claims he made about an IRA murder victim.

The murder of Mr Quinn 13 years ago, and Sinn Fein’s response to it, became a major issue in the election campaign, with Fine Gael and Fianna Fail highlighting the party’s IRA links and accusing it of being soft on crime.

He also described Sinn Fein’s policies on tax and housing as “very negative”.

Speaking during the election campaign, Mr Varadkar said: “One thing that won’t happen, you won’t see a coalition involving my party and Sinn Fein. That’s just not going to happen.

“Sinn Fein, in our view, is soft on crime and also high on tax – proposals to tax business, pensions, incomes, wealth, property, you name it, to the tune of four billion euros, and that would be enormously damaging for the Irish economy, for people’s jobs and incomes and livelihoods and businesses.”

Mr Varadkar also posted a video on Twitter saying he asked his Fine Gael team if they would go into government with Ms McDonald’s party.

The 25-second clip shows various ministers ruling out the idea of going into coalition with the party, with each candidate shouting “no”.